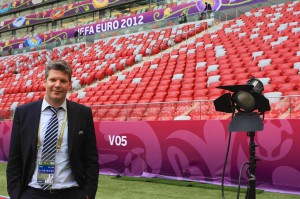 UEFA's Daniel Fuehr is overseeing all venue operations for Euro 12.

For more than three years Daniel Fuehr, UEFA host broadcast venue and operations manager, TV production unit, and the rest of the venue-operations team at UEFA have had the daunting task of making sure Euro 12’s eight venues across Poland and the Ukraine meet not only the needs of the core host-broadcast feed seen around the world but those of dozens of broadcasters from Europe and beyond who are on-site to add a personal touch to the broadcasts.

“You have to adapt to the local culture,” says Fuehr of how an international organisation must approach working with local venue operations, construction, and other personnel. “You can’t just say, ‘This is how we do it.’ We have a framework and have adapted it to the local culture, whether it is manpower, setting up, or other assistance. You need to make the team work together.”

That work has paid off so far because all eight venues, both those that are new and those that have existed for decades, have a similar feel when it comes to broadcast operations. Each has a broadcast compound between 5,500 and 7,000 square meters, plenty of room for the multilateral production trucks for the TV signals and scoreboard video and those from broadcasters doing unilateral coverage. Camera positions are the same from venue to venue, and technical offerings like pitch-side studios, internal studios, lighting, and camera connections are consistent in feel, connectivity, and location. 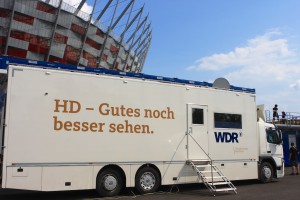 The goal is simple: to minimise the amount of technical setup required for each match.

“The only areas a unilateral broadcaster will need to run cables is the mixed zone, their unilateral camera positions, and the press-conference area,” says Fuehr. “Even the trucks just arrive and plug into the compound [for camera signals]. It avoids having messy cables, safety risks, and having us assisting on cable runs.”

Each venue has approximately 180 people on-site working on the TV production. The core production teams work at two venues, and now, with the tournament heading into the next phase, only four venues will be in use: Warsaw, Gdansk, Kyiv, and Donetsk.

Although the crews have moved between venues, the OB units have not. Fuehr says the distances are too large, road conditions and traffic too uncertain, and, most important, this year, the OB unit is used to produce content the day before the actual match.

“We are delivering coverage of training and practices so that full production day cuts off another travel day,” he adds.

Broadcasters have a number of options to have an actual presence within the venue. Four pitch-side studio locations, each measuring 4 x 3 meters, are available with pre-cabling and available first to the broadcasters from the two nations that are playing. And inside the stadium (and near the tunnel that leads to the pitch) are eight unilateral flash positions complete with lighting.

“Those all have the cables hidden nicely so that broadcasters can just plug and play,” says Fuehr. “It’s super clean because there are a lot of people in the area prior to and after the match.” 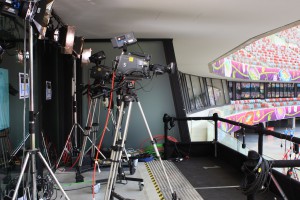 One of two new platform studios in each Euro 12 venue

And new this year are two studios on simple platforms located on the tribune level, where the other larger broadcast studios are located. Positioned in the corner of the tribune level, they provide a panoramic view of the pitch and also give the broadcasters a chance to be on-air right up to match time.

“It’s better for broadcasters because the pitch-side studios need to be off the field 10 minutes prior to the match, and that final 10 minutes is an interesting time,” says Fuehr. “So we constructed two fully equipped platforms.”

And even the commentary positions have a new offering. They are tight quarters, with commentators located in a large section in the second level overlooking the pitch. But small robotic cameras can be located behind each commentator table and, coupled with touchscreen tablets, can allow broadcasters to stand up, turn to the camera, and deliver images with the pitch behind them, perfect for pre-game, 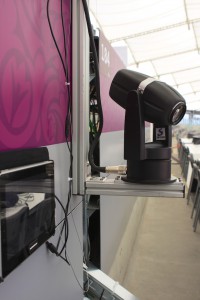 Robotic cameras and touchscreens give new flexibility for commentators looking to be on-air.

Audio signals from the commentary positions are delivered to a commentary control area inside the stadium that then delivers the signals via fiber circuits to the IBC where they are then delivered to the correct broadcaster. Signals can also be passed out to unilateral production trucks in the compound.

The success to date is the latest example of how proper planning and coordination with stadium personnel can make a difference when the event begins.

“Quite a lot of the venues were new, and we were able to be part of that process and allocate our space needs quite early,” adds Fuehr. “And we’ve also been able to work alongside other departments in EUFA to help us with technical areas and allocation of studios.”