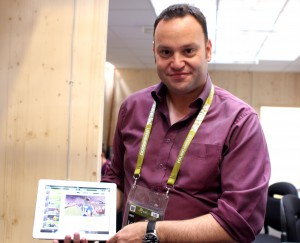 Luc Doneux of EVS with the new UEFA app.

UEFA prides itself on providing all the tools and content necessary for broadcast rights holders looking to get the most out of Euro 2012 rights. The newest way is a white label app for tablet devices and a new workflow for getting video content into the app quickly and easily.

The core technology behind the app is EVS C-Cast, a system that makes it possible to easily build a highlight light clip that synchronizes multiple camera angles without a tremendous amount of manual assembly. Those clips are then published to the app and allow the fan to view the replay in a nearly limitless number of ways.

C-Cast was introduced at IBC last September and Luc Doneux, EVS, head of EMEA, APAC, and events, says its use at Euro 2012 is the first deployment where the content is being assembled and published at a central point, in this case the IBC in Warsaw, rather than at the venue.

“We can clip the segment we want from the live feed here at the IBC and send a command to the server on the truck at the venue and then get the 23 camera angles transcoded in MPEG4 at 2.5 Mbps,” explains Doneux. “We can then transfer, preview, and approve the angles we want to have published to the app.”

During the approval process the user can see all the clips but in order to ensure the clips are published within three minutes of the actual event occurring only four or five angles are made chosen.

“You could put 20 angles but then you would create a [processing] backlog so we try to keep to four or five angles and then during halftime or after the game republish another 50 angles of plays,” says Doneux.

The app publishes the clips in a number of formats and quality levels to best suit the fan’s capabilities. The app is also integrated with Twitter, statistics, and is available in five languages.

The new workflow proves out the possibility for a TV network to have an app publishing team at a network facility monitor EVS servers at multiple simultaneous matches or games and then create clips for numerous games rather than requiring a dedicated crew in the field for each match.

While UEFA and EVS have proved out a workflow and created a white-label app for all of the broadcast rights holders the big challenge now appears to be getting the app development teams at the rights holders comfortable with the concept.

“They want to know how it fits in with their app or if it is in conflict with their app,” says Doneux. “But TSN in Canada offered it for free and the feedback was really good and they were very happy with it.”