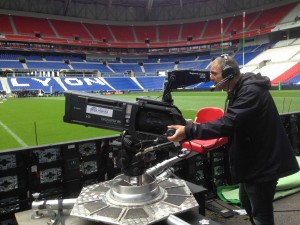 “Come on guys, give your best. I have chosen you because each one of you is a crucial member of the team. Didier Deschamps picked his men for the Euros not because they were the best players but because they work together as a team. It’s the same here, we need to work together.” Fred Godard, France Télévisions’ match director on Rugby Champions Cup which took place in Lyon on Saturday May 14, is giving a last minute pep talk to his technical staff just before kick-off.

He knows the stakes are high: on his advice, France Télévisions pushed the boat out for this final, especially on the DVS slow motion set-up. The broadcaster agreed to install four super slow motion 75 Fps cameras around the brand new Lyon stadium, one of which, again prompted by Godard, was transformed into a portable camera only hours before kick-off, a first on this type of sporting competition.

“We want to be able to follow the players as they go into the dressing room; the slow-motion images should give an incredible intensity to the start of the game,” he said. One of the best-known French sport directors out there, Godard loves to use slow-motion wherever possible and put his own artistic touch on the images broadcast viewers see.

Even the impact of raindrops, as they poured down on the players throughout the afternoon, was heightened by some fantastic slow-motion shots. Another technical innovation to feature on the pitch was the use, for the first time on a live sporting event, of the DVS Mini HF superloupe with a full control, stabilised head.

“It has never been done before. It’s a great novelty, because we can put it anywhere we want on the ground and get those 1000 Fps slow-mo long sequence shots,” Godard enthused. Last but not least, the Euromedia subsidiary also provided a Superloupe HD+ 500 Fps camera, controlled by 5 EVS XT3 servers, which was positionned across the ground facing the Trophy stand. “As a director, I love rugby games because there is more scope to experiment than on football matches  where the rules are more rigid,» he added.

Studio on the ground for BT Sport 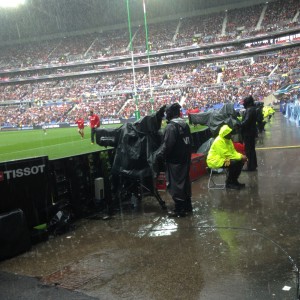 A freedom also appreciated by Daragh Bass, innovation producer at BT Sport, which broadcast the final to its subscribers on TV but also as a live stream on BTsport.com. “As a host broadcaster, France Télévisions has been really helpful and let us enjoy a great deal of freedom on the pitch to get our own feel of the game,” he explained.

The sportcaster was able to install eight cameras mostly on the pitch but also near the fans, in the audience. “We have our own style, we like to have a very nervy, hand-held camera sort of coverage but we love to give a feel of the atmosphere of the game as well,” he said.

The 60 strong-crew included eight people dedicated to either presenting the game or getting those interviews with the players on the ground. “Our concept is very much ‘studio on the ground’; many of the people working for us are ex-rugby players like Brian O’Driscoll and they have great contact with the guys on the pitch,” he said.

The broadcaster also brings along a digital producer for all the online and social media content. “That is one of the benefits of being a recent broadcaster: digital is par for the course and is always included in any sports coverage,” he explained. Among the cameras around the ground, BT Broadcast included three radio cams, an fs 700 for high motion replay and an F5 shooting ENG. “It enables us to get some 4K footage that we stock for our archive,” he said.

Alongside host broadcaster France Télévisions and BT Sport, Sky Sports, Bein Sport and Welsh broadcaster S4C also had their vans and cameras on site. Sky’s set-up was equally impressive: “We have seven cameras on the ground, including two radio cams and one F5 high motion ENG camera. We have three EVS servers in our Skycart and for the game we have chosen not to transmit via a satellite link but using the fibre optic network and we’re transmitting voice over IP,” said Joff White, technical producer at Sky Sports.

For host broadcaster France Télévisions, the game is one of the most important rugby competitions of the year. “This Champions Cup Final is quite special as it is a fight between a British and a French team, which both a have a long rugby history. For us it is nearly on a par with this year’s Rugby Six Nations tournament final match, between England and France, in terms of the drama it conveys and the way it resonates with the audience. It’s certainly one of the reasons we agreed to such an important set up,” said France Télévisions production manager Olivier Chabrol.

In addition to the DVS slow-motion installation, the broadcaster included a number of other technical feats. “We inserted mini-cams inside the protection foam on the goal posts to get a view of the goal scoring and we also decided to invest in X-Motion’s Fly 3D camera, which can be placed 25 metres above the ground but can also be lowered to a 10 metre distance. It really enables us to get great images of the scrums from above the ground,” he said.

The broadcaster also installed Paluche cameras in the changing rooms, two for Racing 92 and for Saracens. “We got an agreement from the coaches of both teams. We find that managers agree to it more and more: the Racing people used to be dead set against it but the team has changed on that, maybe because it can see the relevance of the coverage. We are also very careful to respect the players intimacy, we won’t show injured men at half time for instance,” said Olivier Chabrol.

As is virtually standard now in rugby games, the referee wore a chest-installed refcam to get those scrum close-up shots. And a drone was on hand to get distant shots of the new Lyon stadium, which only opened to the public four months ago.

The broadcaster also installed a Jimmy Jib Rail Easygrip cam but as Olivier Chabrol was keen to emphasise, the real innovation was the HF mini superloupe. “The shots you get with that camera are incredible: although live, they could very well feature in an advertising campaign,” he asserted.

And DVS certainly pulled out the stops to make sure that all would run as smoothly as possible: the 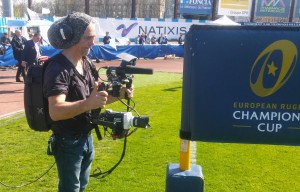 Another innovation was the use, for the first time on a live sporting event, of the DVS Mini HF superloupe with a full control stabilised head.

company had its own truck on site, its DVS 5 XXL Slow-Mo OB van, which according to the company is the largest digital expandable hi-def and super slow-motion and ultra-motion OB out there. It can host up to eight superloupe and super slow-motion systems and up to 12 EVS servers and 16 working desks.

For the Champions Cup, the van had six EVS servers and eight desk operators who made sure those slow-motion shots were as perfect as possible in liaison with the France Télévisions team. “We employ around 20 freelance guys on the ground who set up and test the equipment before the game. The engineers are either there for support or for calibration of the slow-motion shots,” explained Mathieu Lefebvre, business development and R&D manager at DVS.

The company has a lot on its plate in coming weeks as well with major sporting events taking place virtually every week until the end of the summer: the Roland Garros tennis open where the company’s slow-motion images are such a key feature of the coverage is less than a couple of weeks away, and it will then be onto the Euro 2016 and the Tour de France before the Olympic Games while continuing with the Davis Cup right until the final planned in November, if the French team qualifies.

“It’s a busy year for us and a very good one for the Euromedia group as a whole,” Lefebvre concluded.