Live from Paris: FIFA on growing the beautiful game of women’s football

As a result of the strong broadcast coverage so far in the FIFA Women’s World Cup France 2019, viewing figures are significantly higher than they were for the previous Women’s World Cup. While FIFA hopes to get one billion viewers for the tournament globally (versus three billion for last year’s men’s event), it recently released healthy viewing figures for the first round group matches. 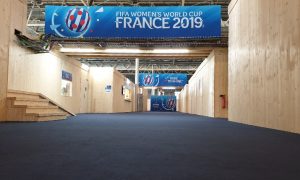 At the Women’s World Cup IBC in Paris, which is constructed from pine. The host broadcast operations are on the left of the central corridor, and the right is occupied by rights holders including Fox Sports and ARD/ZDF

Football fans across France watched their team’s 4-0 opening win, resulting in a record combined audience of 10.655 million viewers. An impressive 19.728 million Brazilian’s tuned in to see the Seleção Feminina’s 3-0 victory over debutantes Jamaica, while a comeback by the Azzurre brought a record women’s football audience of 3.301 million to Italian screens, and the all-British clash between England and Scotland attracted a record women’s football audience in the UK with 4.019 million viewers.

This tournament’s success is already taking the women’s game forward; FIFA has received a record nine expressions of interest in connection with the bidding process for the FIFA Women’s World Cup 2023, from the Argentinian, Australian, Bolivian, Brazilian, Colombian, Japanese, Korean, New Zealand and South African football associations. This represents the largest-ever list of member associations to have confirmed their intention to submit a bid for a single tournament in FIFA’s history. Those member associations are now in France on tour looking at what it takes to host this competition, and then they will have until 4 October 2019 to submit their respective bids to FIFA. 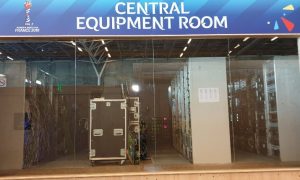 Looking ahead to that competition, speaking to SVG Europe Florin Mitu, FIFA head of host broadcast, states that FIFA is predicting what technologies will feature more heavily in its coverage of the 2023 event. “Clearly the multimedia, digital side, with people viewing on different screens, the different ways of consuming football, is definitely changing. Us older ones are still watching our 90 minutes on the TV, but this area is definitely something we’ll be looking at. We always listen to the broadcasters, and adjust our offering to best suit their viewers needs.

“At this Women’s World Cup,” Mitu went on, “we are doing UHD SDR for the first time, with 1080p being made available at both venues and the IBC and 1080i via satellite transmission worldwide.” 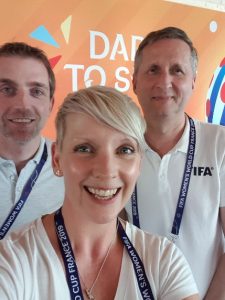 For the last two and a half years since summer 2017, Neil Darroch, senior manager TV operations at FIFA, has been working on the host broadcast and FIFA TV side of planning the Women’s World Cup. The main goal for FIFA in the development of this year’s tournament was to build on the foundation of Canada 2015, taking incentive also from FIFA President Gianni Infantino’s FIFA 2.0: The Vision for the Future, a mandate for the association that he unveiled in 2016.

Infantino said at the time that, “we will invest in the game, its players and its future; we will innovate to improve the player and fan experience; and we will take greater ownership of the business operations for our showcase events”.

On the women’s sport, the mandate set the goal of growing the number of female football players worldwide by 2026 through the development and execution of a strategy to bring women’s football to the mainstream, taking the figure to 60 million, while it also committed $315 million in 2016 to help member associations to incentivise investment in the development of the women’s game to 2026, including funds for the successful organisation of girls’ leagues, women’s professional leagues, and the creation of a development strategy for the women’s game (on top of the resources committed through the then new and fully developed Women’s Football Division).

The women’s game is now benefiting from that and growing, and FIFA is excited to be helping drive that change. Mitu says: “FIFA is putting a lot of emphasis on the development of women’s football.” 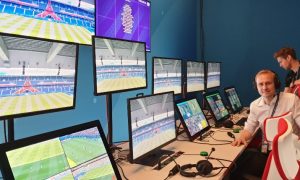 One of the four FIFA VAR rooms at the Parisian IBC

Adds Darroch: “We’re trying to raise the women’s game to the level where it should be, by making the coverage as high end as possible. Alongside the UHD and 1080p live feeds, we provide a wide range of additional content for traditional linear as well as dedicated digital media use. We want to provide the broadcasters with the opportunity to show the colour and tell the stories around the World Cup alongside their live match coverage.”

Broadcasting bonuses that were effective in Russia at the FIFA World Cup last year have been rolled into the women’s game, such as the use of Polecam behind the goals, something that FIFA introduced for the men’s World Cup last year that was very successful, and aerial coverage, which was in demand from broadcasters to be made available for the first time at a Women’s World Cup.

Comments Darroch: “As always, we’ve been looking at maximising use of existing stadia infrastructure while adding facilities to provide the broadcast setup needed for the HB production [up to 29 cameras per match] and visiting broadcasters from around the world to be able to produce on-site.”

“There are lot of ‘firsts’ for this competition,” says Mitu. “While envisaged generating a Women’s World Cup record 1,700 hours of footage made available on the FIFA Media Asset Exchange (MAX) Server during this event, the figure is more likely to surpass 2,000.”

FIFA has dramatically increased the footage available to media rights licensees on FIFA MAX, generated in part by the addition of 24 FIFA TV film crews that are following each team throughout the competition, up from just six film crews (one per city) for the previous FIFA Women’s World Cup.
FIFA has also given broadcasters access to footage on FIFA MAX remotely, so they can work from their home headquarters as though they were on-site, which is also a first for any FIFA event, such is also the addition of the IBC instead of the usual porta cabins. 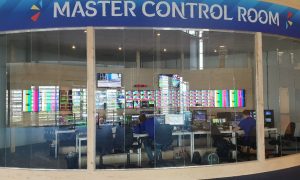 The IBC build started on 15 April. Following four weeks of construction, the technical setup came in in mid May followed by the production teams, and it has been in full flow since the beginning of June.

Learning from the men’s World Cup in Russia has also helped inform the build of the IBC in Paris. For instance, at the men’s World Cup VAR was stationed in two rooms with two sets of workstations in each, but it was found that having two teams working in the same room even for short overlaps was challenging, due to the level of concentration and vigilance needed by each VAR team. For Paris, the architect worked with FIFA to design the VAR area into the IBC design, but this time using four separate rooms with one team stationed in each, creating the quiet work environment needed.

Concluded Mitu: “In its overall Women’s Football Strategy, FIFA marks the FIFA Women’s World Cup out as the cornerstone of its drive to establish the women’s game in the mainstream of international sport. Although the knockout phase has only just begun, the high production value that FIFA TV has brought to this edition has already given a clear indication that the competition is set to become a truly must-watch spectacle.”