France Télévisions has a team of 130 people in PyeongChang working closely with a team of about 70 in Paris to deliver Olympic content to viewers on France 2 and France 3. One of the highlights is a new studio that has multiple positions, robotic cameras to minimise the size of the studio, and a circular design that allows two panels to be slid together to create a 180-degree backdrop behind the commentators.

“Our setup is the same as it has been for the recent Olympics, with master control back in Paris and 70 people split over two work shifts,” says Francis Cloiseau, Head of Sports Production, France Télévisions. “Here, we take in the OBS feeds, unilateral and mixed-zone cameras, and beauty shots, and then we send 15 feeds home to Paris.” 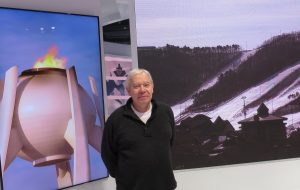 Francis Closieau of France Télévisions inside the channel’s IBC studio, which is controlled from Paris

The typical Olympic broadcast window in Paris is from 1:30 a.m. to 3:30 p.m. with live transmission followed by two hours of long-form highlights and then a magazine show at 5:30 p.m.

“We record that show around midnight in PyeongChang,” says Cloiseau. “The medalists tend to go to the French House [after the medals ceremony] and then come over here for the show.”

Six return feeds from Paris are available for getting content from an archive at home and also for sending the pictures that are placed on the large LCD displays in the studios. The studio show is directed from Paris.

“All of the local routing is done here,” Cloiseau explains. “The audio is embedded into the video feeds that are sent to Paris.”

One new addition is the use of Aldea for transmission services. “It’s been working perfectly,” he says, noting, “We have two transmission paths back to Paris in case there is an issue.”

The team in PyeongChang will also produce coverage of the Paralympic Games next month. It will be a smaller crew and will free up the production team in Paris to focus on other programming.

“Producing it from here is different for us,” says Cloiseau, “but, with the limited Paralympic feeds, we can do it with eight people, which is less expensive than doing it back in Paris.”