In addition to three 8K lenses on Sony cameras, Canon has an 8K camera onsite

Canon Broadcast had a team of seven people on hand for Super Bowl LIV (Sunday 2 February 2020), not only making sure nearly 55 HD and UHD lenses were operating at the top-level but also playing a role in the use of three Canon 8K lenses that were coupled with a Sony UDC-8300 camera.

The camera was in position in order to give the Fox Sports production team the ability to extract up-close images.

“We were blessed to have Mike Davies from Fox and Sony request our lenses,” said Rich Eilers, national accounts sales director, Canon USA. “The lenses were going to have their formal introduction at NAB, but we decided to bring them here.”

Canon also had its own 8K camera onsite for the game. Coupled with a 150-degree Canon lens, the camera was located in the high-slash position and captured a panoramic view of the field. 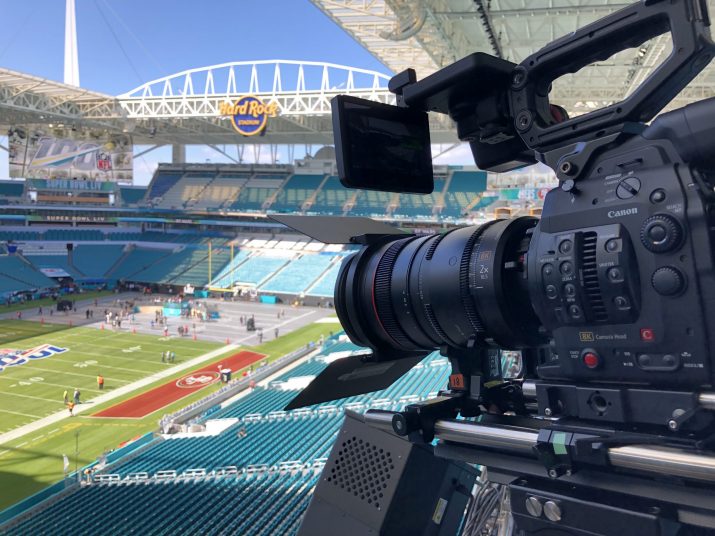 “The package is unique in that the Canon lens and Canon camera each know what the other is doing,” said Eilers.

“Then we have a processor that takes the 8K image, splits it into four quadrants, and flattens it out to remove any distortion from the wide-angle. It takes four individual servers to create the image, and then it is pumped over to the main production truck.”

The complement included two Canon SP51x15.5 box lenses and one 7×10.7 handheld lens which was being used to offer increased zoom functionality that can exceed that possible on the 4K cameras.

“Slo-mo requirements are growing as broadcasters want it from every possible angle, and lenses with super-high resolution give the best odds from a light-gathering standpoint,” said Eilers.

“Systems like our 122X lens and 111X lens and even the rest of the UHD lenses here are also able to communicate the gain to the Sony cameras so that the full telephoto lens can be used without compromise.”