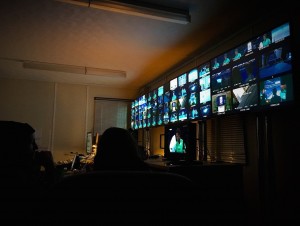 Maintaining a long relationship that began in 2000, Gearhouse Broadcast was engaged to provide broadcast services for ATP Media during the Barclays ATP World Tour Finals at London The O2, which concluded on November 20. The company also supplied remote coverage for Sky Sports during the latest edition of the professional men’s tennis tournament, which concluded with a singles victory for Andy Murray, who will now close out the year as the World Number 1.

On behalf of Sky Sports, Gearhouse facilitated an HD remote production that allowed the entire coverage to be cut from its HQ in Osterley, West London. On site at The O2, the Gearhouse Broadcast facility supported the transport of 25 video signals to and from Osterley, with the vast majority being sent as IP streams from equipment hosted in the Gearhouse MCR racks.

Among other important considerations, the tournament saw Gearhouse and Sky work closely to integrate the Riedel Artist OB frame with the broadcaster’s own internal Riedel system – thereby providing 20 VoIP communication circuits between the venue and base.

Gearhouse also provided camera facilities for Sky Sports including four new Sony HDC-4300s. Two were studio cameras, both of which have drops of the practice courts located in the Sponsors Village and Fan Zone, as well as courtside. There were also two cameras in the player interview room working with the Skypad touchscreen tool, as well as a site-wide RF camera and a commentary camera.

In a statement issued before the end of the tournament, Gearhouse Broadcast unit manager Hamish Harris commented: “We ran a similar remote production for Sky Sports in the past and the benefits are obvious in terms of consistency of output, creating time efficiencies and generating cost savings. Aside from having an established technical infrastructure, and an extensive understanding of IP transport, good communication is the key to a successful remote production. It’s vital that the on-site crew know what those back at base are doing and vice versa to make sure that everything runs smoothly.”

Gearhouse Broadcast also provided all of the professional broadcast solutions used by ATP Media as host broadcaster at the Barclays ATP World Tour Finals. The ATP World Tour Masters 1000 and ATP World Tour 500 tournaments are among the others that see Gearhouse and ATP collaborate closely.

Speaking to SVG Europe during a visit to the tournament on 15 November, ATP Media executive producer Dominic Gresset confirmed that “we continue to have a fantastic relationship with Gearhouse Broadcast. Together we are always looking at new ways in which we can enhance and enrich the experience of watching the ATP World Tour events. It’s a really creative and fruitful partnership.”

Look out for detailed reports on SVG Europe about ATP Media’s work at the 2016 Barclays ATP World Tour Finals and a host of new innovations, including a groundbreaking VR trial, in the coming days.