Live from Tokyo Olympics: ARD and ZDF have studio presence but production shifts home to Mainz 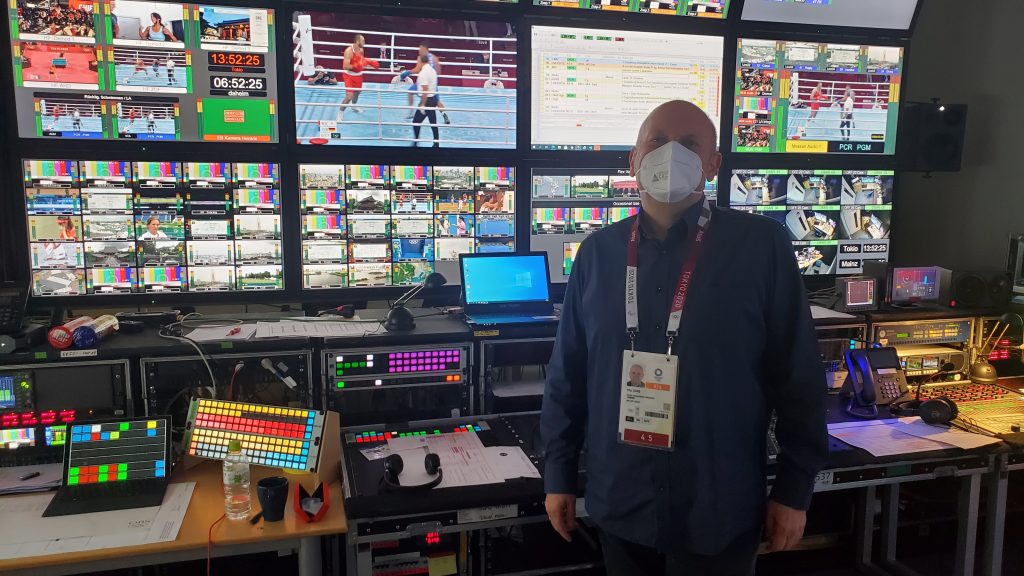 When German public broadcasters ARD and ZDF originally planned out their Tokyo Olympics plans, they included a studio with a view to Rainbow Bridge and a control room for the studio as well as edit facilities and more. The studio location is shared with Austria’s ORF and Switzerland’s SRG (each has their own studio), is still located along the water and still has a dramatic view and gives talent a chance to interview athletes in person. Many of the other facilities, however, are not.

“Corona changed all of that and now we are connected to production control in Mainz where we have an infrastructure like the IBC here: the National Broadcast Center which is a wooden structure with shipping containers,” says Vito Zoiro, ZDF, technical manager, special projects. “The studio is connected directly to production control in Mainz, and we don’t even see the signals here. We also have our own cameras from athletics and aquatics going directly to Mainz where there is a sub control room for each.”

Four 10 Gbps circuits from Telstra help transport signals back to Mainz. LiveU systems are also in use, sending ENG signals directly from mixed zones to home. The IBC facility basically passes on the OBS signals as well as audio signals from eight voice over booths (an additional 18 are back home in Mainz).

“In principle, everything is working,” says Zoiro. “We had a plan and it took a couple of days for some of the commentators and producers to understand the workflow changes.”

ARD and ZDF alternate days of coverage for the linear channel and are also offering up to 10 live streams of online content.

With the games at the halfway point and everything running well the only issue might occur on 3-4 August when the fiber cable that is currently transporting the signals is replaced back in Germany after being damaged in the floods earlier this month.

“It will be repaired, and we will have to establish a connection in a different way,” says Zoiro.

Helping back home is the Mobile Produktions Einheit (MPE) which Zoiro says was conceived when ARD and ZDF realized that it would be impossible to get equipment shipped from the Euros IBC in The Netherlands to Tokyo in time for the start of the games.

“We also can’t rent equipment, so we need to have some clever planning to be able to cover both,” he adds.

Other tools making a difference are the LiveU gear as well as the roonect kit which has a USB audio interface and  commentary headset that can connect to a computer.

“After this we’ll sort out what we did and then take the many ways of doing things and reduce that to the useful ones as not all of these workflows are really useful,” he adds.