The Austrian ski team is two-for-two in gold medal wins at he FIS World Championships in Vail/Beaver Creek and that is just the way Austrian public broadcaster ORF wants it heading into the big downhill races this weekend. More importantly, it makes the extra effort being put into the TV production worth it. 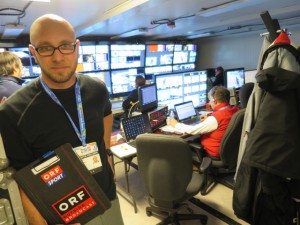 ORF’s Christian Zettl inside the broadcaster’s master control for the World Ski Championships.

“This is the biggest production of the year for our sports department,” says Christian Zettl of ORF. “And one reason this is very important for us because it airs in primetime in Austria.”

ORF has a team of 90 people on site and most of the production work is in Beaver Creek. The broadcaster has a studio facility with two cameras at Red Tail Stadium as well as a position in the mixed zone at the finish line, two cameras at a commentary position, and a wireless camera at the starting gate.

“We brought a lot of equipment from Europe as we have a German partner for technical equipment but most of it is from us,” says Zettl. “We were trying to get equipment from here in the U.S. to save transportation costs but the American broadcast market is more expensive.”

Zettl says that the ORF production team is the first to arrive on site and the last to leave and for good reason: viewers back home are tuning in to everything from edited pieces that run during morning news programsme back home to live coverage of the medal ceremonies which air in Austria at 2:30 in the morning.

“We start our programming an hour before the race,” he says. “And we also show all of the training runs live.”

The ORF facilities at the IBC include three Apple Final Cut Pro editing stations, a content management area where content is recorded and connected to Vienna via data pipes, a graphics area, and a control room. There is also an area for analysis via Dartfish, which allows for the runs of different skiers to be overlaid for comparison.

“After the race our race experts use Dartfish and also stop and move video backwards and forwards and draw on the screen to show the differences [between skiers],” says Zettl.

ORF also has a presence at the medal ceremonies (especially given the success to date) and an interview corner at the Austrian House where the members of the team will often make appearances.

“It’s challenging being at the other end of the world producing this,” he says. “But the men’s downhill [on Saturday] is the discipline where the biggest skiers are born. And Austrian fans also know where we can expect medals and with two wins already they can expect medals in every race. What better start can we have?”