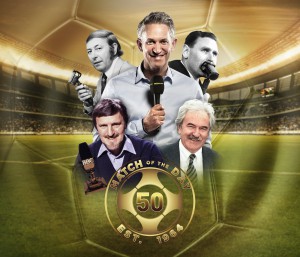 MoTD broadcasters through the ages, including the current presenter, Gary Lineker (centre)

Match of the Day, the BBC’s flagship football programme, made its debut on 22 August 1964 on BBC Two, when highlights of the match between Liverpool v Arsenal were shown. Kenneth Wolstenholme, who was to be the voice of MoTD (as the programme became known) for many years, opened the first programme with the words: “Welcome to Match of the Day, the first of a weekly series coming to you every Saturday on BBC Two. As you can hear we’re in Beatleville for this Liverpool versus Arsenal match.”

The audience was estimated to be around 20,000 – less than half of the number who attended the game at Anfield on that Saturday afternoon. In fact, the limited nature of the viewing audience on BBC Two at the time (the channel was to be seen only in London and Birmingham) was one reason why the English Football Association allowed the coverage of matches. The FA was apprehensive that television would dramatically reduce the crowd size – a fear that proved to be unfounded.

In those days, most outside broadcasts were covered by just four cameras – few scanners were equipped for bigger capacity but today, depending on the match, anything up to 36 cameras and beyond are deployed. And, of course, in 1964 there were no such things as spidercams, Steadicams or polecams.

From those humble beginnings in the days of black and white with 20,000 viewers, Match of the Day is now a must for all football fans, with regular audiences of up to 6 million across the weekend watching extended highlights of every Premier League game. That means one in four of viewers on a Saturday night watch the programme.

Interestingly, it was originally envisaged that MOTD would not remain on the schedules for more than one – two, at the most – seasons. The programme was created to prepare BBC cameramen and technicians for the 1966 World Cup, for which the Corporation was host broadcaster.

The first significant step to building the audience came just one year later when MOTD switched to BBC One. At the time, a few clubs tried to block its broadcast, echoing the FA fear of a decline in attendances. A compromise was achieved when it was agreed that matches would not be shown until after the day’s play was concluded. And with England’s World Cup victory in 1966, football was assured of a prominent place in the programmers’ schedule.

Talking of World Cups, it would seem that a number of Labour party politicians believed England’s quarter-final loss to West Germany in the 1970 competition resulted in the party’s defeat in the General Election four days later. Government minister Anthony Crosland wrote in his diary that he blamed Labour’s disappointment on “a mix of party complacency and the disgruntled Match of the Day millions”.

November 1969 saw the first MoTD in colour, and again Liverpool was host – this time playing West Ham United. Viewership wise, the audience was up to about 10 million by then, and they were treated to 35 minutes from Liverpool’s 2-0 win over the Hammers. In those days, few if any clubs were really set up to handle the demands of television crews, and so the boardroom at Ainfield was turned into a temporary presentation studio for the occasion.

Two years on, and the new technology of the ‘video disk’ meant that slow motion replays were available to directors. Those replays immediately proved that a West Bromwich Albion goal against table-toppers Leeds was offside.

These replays, however, presented another challenge. There were no replay monitors in the commentary position for some years and David Coleman – another long-time commentator on the programme – paused for four seconds after the ball hit the net, then replayed the build-up to the goal in his mind, describing it as best as he could from memory. His recollections were later laid down against the slow-motion images in the editing suite.

Perhaps one of the most significant changes to help MoTD in its progress has been the development of editing technology. In those early days, tape editing was slow and cumbersome, but with modern non-kinear editing programs, whole sequences can be ready for transmission in a small fraction of time needed in the ‘60s.

Over the years, the BBC and ITV battled it out for broadcasting rights to various leagues and cup competitions. Transmission days and times were changed – and changed again – in order to capture the biggest audience shares. Afterwards, of course, Sky (and even later, BT Sport) came on the scene and changed the television football landscape forever.

So what of the next 50 years? Ultra High Definition has already been used and is set to grow. 3D is still utilised, but on a limited scale. Whoever writes this column in 2064 will doubtless have many more innovations to discuss.