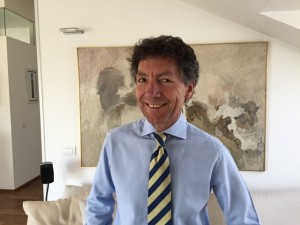 Mediaset Premium is set to introduce the first 4K channel in Italy on 28 May with the Real Madrid/Atlético Madrid final of the UEFA Champions League in Milan. The broadcaster will also air the same match in HD, free-to-air, on Channel 5 HD.

Eugenio Pettazzi, CTO of Mediaset Premium, provided some background details on the new service: “It is to be found on a dedicated channel, LCN 391. All Premium subscribers will have the right to view [as will] customers who have purchased the pre-paid rights to view the UEFA Champions League. They need to have a TV that is 4K-enabled to receive the signal encoded HEVC 50p [Italian standard] and also a SmartCam or HDCam for decoding the signal. The existing Premium set top boxes-enabled are not compatible with this standard.”

The dedicated channel was on air as of mid-May, but with a static screen only, “but on the Champions League final on May 28 we will open the dedicated 4K channel [with its first broadcast],” added Pettazzi.

After the event the channel will be available for further transmissions of major events in 4K, and it is easy to predict that most of the programming will be occupied by sports events.

“It is [historically significant] because to date there is no other 4K DTT channel [in Italy],” he said. “In this regard it should be noted that to cover the event we need to use the bandwidth of an entire mux with which 3/4 channels in HD are normally aired. However, it is easy to expect that soon we will also broadcast some other very important matches in 4K. The 28 May event will be shot by a UEFA OB van dedicated to 4K filming – [and this] vehicle which may be deployed for other important events.”

In fact, the match will be covered by two distinct production vehicles: a Premium one that delivers the HD feed and the aforementioned 4K-dedicated one.

“At each mobile control room a director will be in charge and for the 4K feed an experienced specialist [will oversee the delivery of] sharper, more scenic images with slower camera movements that emphasise the higher image definition, [as well as] the most important moments of the game,” said Pettazzi.

The event will be followed with 14 Sony cameras for the feed created directly by UEFA. There will also be a different commentary to that accompanying the HD broadcast. All images will be native and no pictures will be HD ‘upscaled’ to 4K. The parallel coverage in HD will be created by Premium as the host broadcaster, using 54 cameras and extensive replay capabilities.

Paolo Schillaci, project manager at Mediaset Premium for the event, said: “We stress that, despite this being the first time that such a product is broadcast in 4K on a digital terrestrial channel, it is not a testing ground but a consolidated and repeatable workflow [covering] the whole 4K chain.”

A strategic choice was to move a mobile Premium OB van to San Siro and use Harmonic encoders on site. Hence, from the stadium, the transport of encoded signals reaches the HQ in Segrate, where it enters the mux. This greatly simplifies the signal transportation process.

In addition to this being the first 4K/DTT broadcasts, “we are employing a number of frontier technologies, which is a new way to propose this type of ‘super clear’ and ‘super spectacular’ images. [The result is] a new way to both make and enjoy television.”