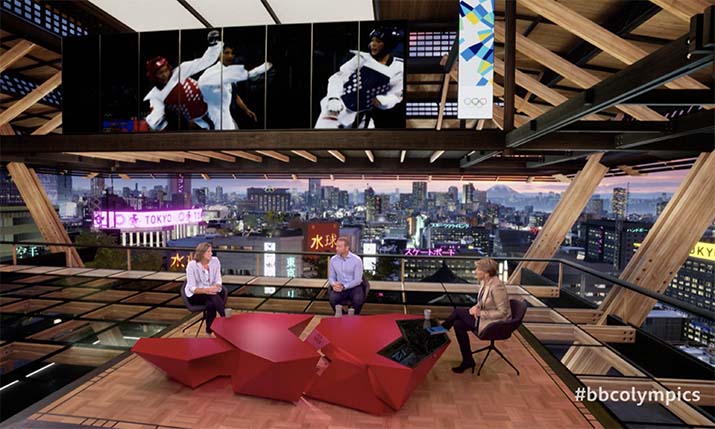 StarTracker technology from Mo-Sys Engineering was front and centre of the innovative virtual studio production for BBC Sport’s coverage of the Tokyo Games. The entire virtual graphics production was implemented by Moov, a UK-based sports and events graphics company.

Dock10 at MediaCityUK hosted BBC Sport and the Moov virtual production. The innovative design was at the heart of BBC Sport’s main presentation and featured a stunning backdrop of the host city. Five Mo-Sys StarTracker camera tracking systems, along with remote camera heads, formed a key part of this virtual reality workflow.

Moov began work on implementing the concepts and designs for a studio that combined virtual sets, augmented reality and real-time motion graphic well before the pandemic. The plan was to have the studio on location at the games, creating a dynamic virtual environment that provided a sense of spaciousness and enhanced both the storytelling and viewer engagement. However, with the arrival of the pandemic, the virtual studio design and workflow had to pivot to relocate to dock10’s Manchester facility.

Michael Geissler, CEO Mo-Sys Engineering, said: “We are so proud of the central role that StarTracker played in this landmark production of the events from Tokyo, and it was a pleasure to work with Moov and BBC Sport once again. The StarTracker system was vital in helping Moov pivot from its pre-pandemic plans to locating the studio in the UK and in maintaining a smooth integration between CGI and live elements. In fact, it was so seamless that viewers complained because they thought the studio was actually on location in Tokyo instead of in Manchester!”

In the case of the design for Tokyo, there was additional complexity from having to operate within a multi-level studio. The team from Moov also had to ensure that the rail camera was always out of shot, which they were able to do using StarTracker by applying dynamic masking to the head of the jib. StarTracker also seamlessly integrated with the Brainstorm technology that Moov deployed for the project.

Nevil Appleton, director and co-founder of Moov, commented: “We own and have used Mo-Sys technology for a few years now, and StarTracker is our go-to system because it works, and so ticks every box for us. We pick best-in-class technology for the types of projects that we work on and, thanks to StarTracker, camera tracking is the thing we have to worry about least – that is invaluable for us and our clients. The BBC Sport team was already familiar with the power and reliability of StarTracker from Match of the Day and its coverage of Wimbledon, so they knew what it could do and trusted that the system would perform as we needed it to.”