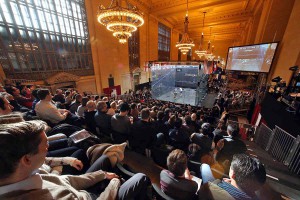 UK-based broadcast graphics company MOOV has extended its services into OB with a three-year production deal with the Professional Squash Association (PSA) to provide production services for its World Tour events. The first event in the contract is the J.P. Morgan Tournament of Champions, held 16-23 January 2015 from inside Grand Central Terminal in New York City.

Nev Appleton, director, MOOV, says: “MOOV has 15 years’ experience working in live sport productions, which has given us the invaluable insight that has allowed us to expand in to the production services sector. Winning the PSA contract demonstrates that we are a diverse and expanding business. Initially we will focus on similar-sized projects that require a streamlined, economical but high-quality production, but as we expand our experience and resources we will also look at bigger projects.”

The PSA World Tour will visit many unique locations which will present challenges when setting up production areas. Erecting a state-of-the-art glass court at the Grand Central Terminal involves dealing with varying light levels from the chandeliers and iconic windows, as well as tricky acoustic levels from all areas of the hall.

Appleton adds: “This fast-paced tournament is played literally feet from the public and space is limited, so the flyaway was built to be flexible. In addition to a radio camera, we decided to use remote cameras in six other locations so we no longer have to worry about having locked-off shots when there’s no room for a camera operator. This gives the production a more flexible and creative choice of shots than is usually seen in squash coverage.”

Dan McDonnell, MD of Timeline Television, says: “We are delighted to be partnering with MOOV on this long-term contract with the PSA. Our expertise and heritage in outside broadcast, system integration and on the ground operations will help MOOV bring squash fans around the world these exciting tournaments.”

BT Sport and 15 other international broadcasters will take the live feed from the Semi-Finals and Finals. Early rounds will be streamed live on the PSA website and various other watch and bet websites.