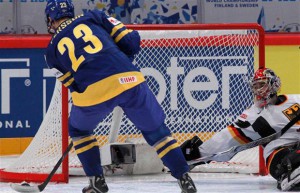 MTV3, one of the largest commercial broadcasters in Finland, used the never.no Interactivity Suite (IS) during 2012 IIHF hockey matches to harvest related social media content from its second-screen app and sites such as Facebook and Twitter, and incorporate that content into its hockey broadcasts.

“Sport fans often carry on a running commentary through social media while watching a game,” says Jaron Milner, head of MTV3’s consumer interaction businesses. “The Interactivity Suite enables us to tap into that commentary easily and use it to add value to our broadcasts. Now we can find and filter viewer comments and absorb them into our broadcast quickly and efficiently, which helps spark lively conversation about the games as they’re happening.”

With IS, MTV3 producers monitored Twitter hashtags and the station’s Facebook page to harvest and capture real-time social conversation, moderate the content, and directly ingest it into their Hego graphics system for on-air playout. Rather than having to browse social media sites looking for good content, and then manually copy and paste it into the graphics system, MTV3 can now do it all from a single system, which greatly streamlines the workflow.

“With IS, MTV3 is getting hockey fans involved in the action more completely and efficiently than ever before,” adds never.no CEO Lars Lauritzsen. “It’s an example of how sports broadcasters of all kinds can take advantage of Social TV to increase fan engagement and drive viewer loyalty — something that’s becoming more and more important as broadcasters compete for market share.”

The never.no IS is a toolkit for creating the technical backbone of interactive broadcasts and Social TV. IS supports true participation TV by enabling viewers to influence a broadcast in real time, and allowing them to interact with one another and the rest of the world. With IS, a broadcaster can effortlessly aggregate user-generated content from social media sites such as Twitter and Facebook into programming, and even build synchronized companion apps that enable viewers to interact with their televisions using an iPad® (or tablet), PC, or smartphone.