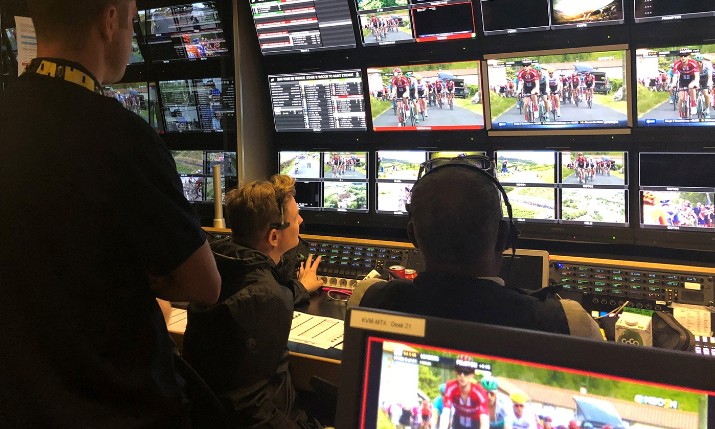 As the peloton prepares for monster mountain stages ahead in the Alps this week, NBC Sports Group is providing US cycling fans with a deeper look at the action than ever before.

NBC has deployed several new production enhancement tools for its coverage of the 21-day race, including an AR-based virtual graphics and telestrator system in the studio and, for the first time, live feeds from point-of-view (POV) cameras mounted on several competitors’ bicycles.

“We definitely feel like we have more tools to work with this year than ever,” said NBC Sports coordinating producer Joel Felicio, “and we have an amazing team as always. It’s 60 of us that are all in this together. Once a year, we gather together, and you get to see all your friends again. It’s a long journey, but everybody absolutely loves to be here, which is great because this is one of those events where you cannot survive without everyone being positive.”

“That’s the ambitious challenge that we’re facing here with this technology; I don’t think it’s ever been done before in this sort of mobile environment.”

By the end of the final stage on July 28, NBC Sports will have presented more than 350 hours of live, primetime, and encore coverage of the 106th Tour de France, across NBC, NBCSN, and the NBC Sports Gold app.

Although most of NBC’s actual race coverage will be derived from the world feed produced by France Télévisions and Euromedia, NBC will once again travel its studio show and commentators daily to the finish line of all 21 stages.

“We’re at the finish line every day,” noted Felicio. “That means we do a full set and strike every single day. We finish our show around 7:30 or 8:00, and our caravan of trucks pack up and drive to the next finish location overnight. Then, we do it all over again the next day.”

NBC Sports’ studio production has a new tech toy in its arsenal this year: an augmented reality graphics and telestrator system developed by Israel-based Morpheus, which produces virtual cyclist graphics. NBC commentators can virtually move and analyse up to 15 cyclists within a hologram-like 3D space in NBC’s mobile studio set.

While AR tools like this are often used in a fixed-studio environment, NBC and Morpheus must deal with the added challenge of moving and recalibrating the highly complex system on a daily basis. 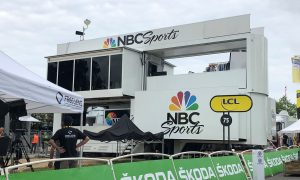 “That’s the ambitious challenge that we’re facing here with this technology; I don’t think it’s ever been done before in this sort of mobile environment,” said Felicio. “[The system] is obviously more suited for a [fixed] studio, where you can set it and forget it and don’t have to move it. But, in our case, we are moving our studio to a different location every day. We have someone dedicated to making sure everything is set up correctly each day, because the studio desk has to be put back and rebuilt in the exact same [configuration] every day in order to calibrate the system.”

The AR system also has the ability to virtually represent elevations and wind currents, allowing NBC analysts to visually explain the concept of a pace line and how drafting can impact the race.

“It’s going to make it easier to explain some pretty advanced [cycling] concepts to people in a visual way,” says Felicio. “Once we start really playing with this tool, I think there is going to be an infinite amount of great things we can do with it.”

NBC’s coverage also features 3D animated maps that track where the riders are in real-time on the route.

For the first time, NBC Sports is integrating live feeds from cameras mounted on several competitors’ bicycles. 4G cameras on up to eight bicycles per day transmit live to the world-feed control room (based on the strength of the signal). The cameras can be mounted under the rider’s saddle and on under the front handlebar.

“This is something that we’ve been talking to the ASO about for years now, and we’re excited to finally be able to make it happen,” said Felicio. “We’ve had cameras on the bikes for years recording footage, but this year will be the first time we can put it up live. You get a lot more sense of how closely packed in they are and riding elbow to elbow.”

“It’s going to make it easier to explain some pretty advanced [cycling] concepts to people in a visual way. Once we start really playing with this tool, I think there is going to be an infinite amount of great things we can do with it.”

As always, Tour de France coverage relies heavily on RF cameras (provided by Euromedia), with two helicopters covering the race and five motorcycles covering the action. One helicopter carries a gyro-stabilized camera system with a telephoto lens for taking close-ups; the other is outfitted with a wide-angle lens for capturing the sweeping landscapes and the peloton. Two aeroplanes relay the footage via RF to the world-feed control room.

In addition, two fixed cameras are located at the starting line (five in the case of race-against-the-clock time trials, five others at an intermediary point), and 10-12 cameras are at the finish line each day.

NBC Sports cycling analyst Christian Van de Velde rode several key stages of the Tour in advance, wearing special raptor sunglasses (the same technology used by US fighter pilots in the visors of their helmets) to preview critical points on the course. On several of the previews, onscreen telemetry shows his speed, power, and cadence.

Plenty of personalities on the set and throughout the course

NBC’s Tour de France production operates out of four trucks in the technical compound near the finish line: two production trucks, one satellite uplink truck with an edit bay inside, and a double-decker mobile studio (the lower level serves as an office), where host Paul Burmeister and analysts Van de Velde and Chris Horner provide commentary for daily pre-race, post-race, and primetime studio coverage.

NBC also deploys an additional satellite truck at the start line, along with several ENG crews to shoot interviews.

NBC Sports ‘Inside-the-Race’ reporter Steve Porino once again has a camera focused on him as he provides real-time updates on race situations while travelling the course aboard a motorcycle.

“He’s now able to interview team directors live on the air as they’re driving in the car 50 miles per hour,” says Felicio. “We love that because it gives more of a sense of what is actually going on out there.”

NBC’s commentary booth featuring longtime play-by-play caller Phil Liggett with analysts Bob Roll and Jens Voigt is also located near the finish line each day. Reporter Steve Schlanger is on hand, delivering live reports from the start line at several stages as well as throughout the race.

“I think the more voices you hear, the more you can keep everyone’s interest,” said Felicio. “Thankfully, we have a lot of talent onsite, so we’re hearing from Steve Porino inside the race, and we’ll have live reports from Steve Schlanger on a few days at the start, and Jens Voigt at the finish, and we’re hearing from our team in the studio. I think it’s also good to have a fluid telecast with lots of voices involved.”