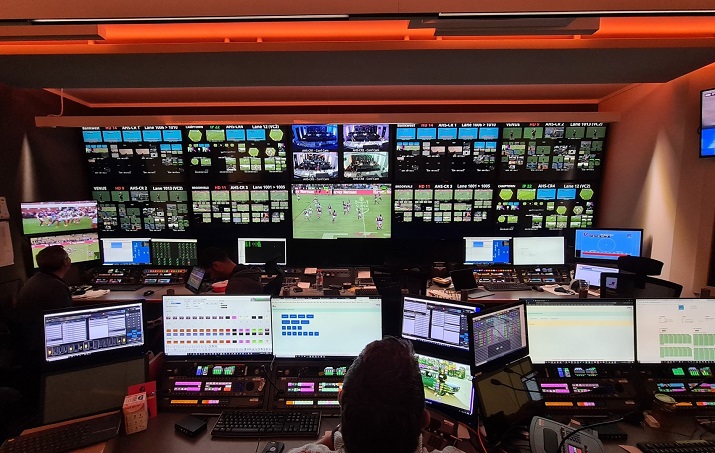 NEP Australia has been hard at work in recent months, and not just on productions big and small. The company has also embraced 4K in a big way, with all facilities – both those with wheels and those without – now capable of true 4K production.

“This is driven by local demand for 4K as there are a couple of broadcasters that are pushing the 4K boundaries which is pretty cool from our perspective,” says NEP Australia director of technology Marc Segar. “And that pushed us to look at upgrading all our in-the-field and acquisition facilities. So, it means new cameras, new lenses and there’s a whole bunch of replay channels that are also upgraded to 4K in a very short timeframe.”

NEP was given about six months to complete the project and as of June 1, five mobile units as well as the Andrews Hubs have made the leap.

“There’s always going to be a market for the big double-expanding trailers. That’s not going away. People still want to be on site, and we are giving them many different solutions.”

“It’s not so much in the networking because the networking is scalable so that part is simpler to switch to 4K,” explains Segar. “And in fact, we were already covering half of our events in 4K and have been doing both HD and 4K since 2018, so it’s not alien to us. But being 100% 4K capable at the Hubs is new.”

Segar says NEP Australia has developed what it calls the “Hybrid Grip Truck” which is basically a tender vehicle that carries the cameras, lenses, cable heads, tripods, and other gear.

“It also has a small acquisition unit at the front of it with lightweight networking and using cameras that are IP native,” he says.

“This minimises the hardware required on site, reducing the footprint from two trucks to one truck. It also lowers our cost base, since we only need to move one truck. This has a positive environmental impact as fuel needs are reduced by 50%.”

Those less resource-heavy vehicles are tied in via fibre to the Andrews Hubs (one in Sydney and one in Melbourne) which is where the core production team produces the show.

“They don’t experience anything less than they would do if they were in the field,” he says. “We put them into a centralised facility and give them the same experience that we get on site.”

There are still some 1080p sources involved in the productions as Xmo cameras or POV and PTZ cameras have not made the leap to full 4K operations.

“I don’t really see the point in moving PTZ cameras to 4K, because they need the pretty good lens to be resolved in the right resolution for 4K,” adds Segar.

“And if you actually benchmark them and look at the image from a 1080p PTZ converted to 4K, it’s not worth bringing back the bandwidth and dealing with the bandwidth internally for 4K.”

Five OB units are 100% 4K from the ground up. The remaining legacy trucks have upgraded ‘connected kits’, and the truck operates in 1080P locally with all 4K signals coming back to the hub.

“We want the images from the camera back at the Hub, so that’s been the compromise to make the Hubs 100% 4K,” he adds.

NEP Australia’s IP25 is the latest truck to hit the road, and it shares a lot of the common network design found in NEP’s newly minted Supershooter 6 in the US.

A big challenge for true 4K is the impact on replay channel resources, and Segar says NEP Australia offers clients the opportunity to work with either 4K replays or 1080p.

“There is a small compromise with 1080p for replays, but generally content is not persistent, or on air long enough as it’s moving quickly,” he explains. “If it’s not one of your key match coverage cameras you don’t really need to capture it in native 4K.” 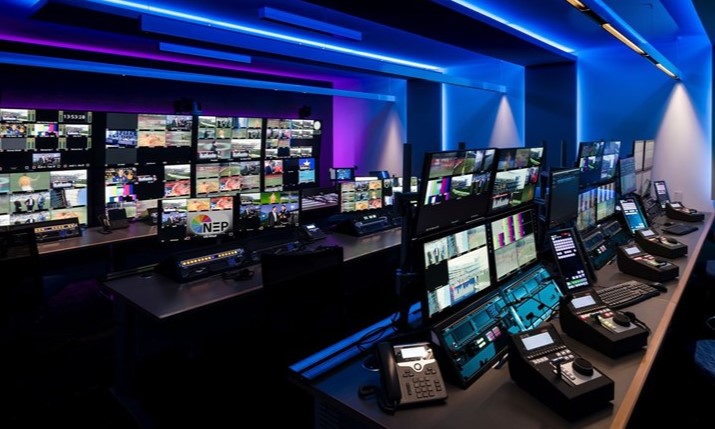 The Covid pandemic also resulted in NEP building smaller facilities in Adelaide and Brisbane. EVS operators, for example, can go to either of those offices and use a control surface to tap into hardware located in Sydney or Melbourne.

“There’s no rack room needed, just a half-rack with a couple of network switches for monitoring,” says Segar. “The Brisbane facility does have an audio room built into it with an audio panel, speakers for monitoring, and video monitoring.

What’s next for NEP Australia? In March of 2023 the plan is to add HDR into the mix, build out a Dolby Atmos control room, and move to Grass Valley production switchers/vision mixers, following their use on a major sports production in the last quarter of 2022.

“We’ll move to Grass Valley vision mixers because when we upgrade to 4K, we don’t lose any resources with them, and that was critical for us,” says Segar. “We won’t offer something to a client that is compromised.”

There will also be two more trucks hitting the road in 2023.

“There’s always going to be a market for the big double-expanding trailers,” he adds. “That’s not going to go away. People still want to be on site, and we are giving them many different solutions.”