Last weekend, CBS Sports and NEP Broadcasting entered the era of IP-based routing in the USA. The new four-trailer SSCBS production unit fired up for the Wyndham Championship PGA golf tournament in Greensboro, NC. The unit will be deployed by CBS 48 weeks out of the year as the main production unit for golf coverage as well as for Thursday Night Football (and Super Bowl 50). 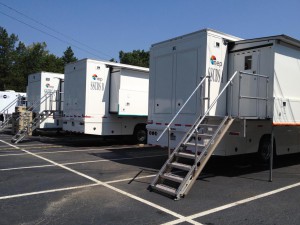 “There are a lot of cool things about the unit as we have taken some design and floor-plan ideas from a couple of recent projects,” said Joe Signorino, VP, systems integration, NEP. “But it is the Evertz IP routing system that brings an interesting amount of flexibility and scalability to the table. It’s a pretty serious routing system.” The use of IP routing future-proofs the unit in a number of ways. First, the unit is capable of handing 4K signals. In addition, over the next year or two, a wide variety of production tools are expected to make the move to IP.

“The router does take up more space, especially with the conversion gear to get signals back to baseband,” explains Signorino, “and there has been a lot of learning about how to move packets around in the router.”

The unit features three double-expanding 53-ft. trailers. The A unit has a 15- x 21-ft. production area and a 15- x 18-ft. graphics area (each with 12 positions). At its core is a Grass Valley Kayenne Elite production switcher with 192 inputs and nine mix effects.

“The A unit has an NFL configuration and a golf configuration,” noted Signorino, “but CBS can do whatever they want, as the consoles and components can move around.”

Besides the engineering and video area, the B unit houses the main audio room (measuring 15 x 8 ft.) and the audio submix room (10 x 10 ft.), both with three operator positions. Key equipment in the main audio room is a Calrec Apollo console with 72 facers and Bluefin2 signal processing to provide 1,020 channels; in the submix room, a Calrec Artemis console with Bluefin and 64 faders. Day Sequerra upmix, downmix, loudness meter, and stereo synthesiser gear is also in place alongside B&W surround-sound speakers and an RTW digital audio scope. A mix of Shure, Sennheiser, Sony, and Audio-Technica mics are also aboard.

“The B unit is the central equipment area,” explained Signorino, “with the EICs sitting upfront, five video positions, and then fiber patching and test positions.”

Sound isolation was a major concern given that the two audio areas are next to each other and also near the central equipment room. 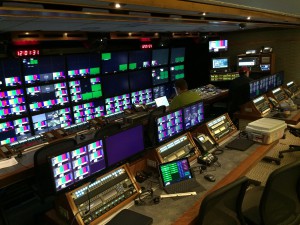 The front bench area inside the A unit of SSCBS

“All of the noise-generation equipment is in a separate room, but there was also a concern about sound isolation,” said Signorino. “We hired an acoustic-engineering group to work on a couple of things so we could get chassis-born vibrations out of the audio room. We also [modified] an air-conditioning duct so that air flow is more indirect, and adjustable dampers can tailor the airflow to the room so that sound can’t get up into the duct and get into another room.”

Getting rid of the chassis-born vibrations required the use of floating floors with acoustically tuned isolators. Dense rubber is also in use to absorb additional noise.

“When you walk into the room, you know it’s an audio room,” said Glen Levine, president, U.S. Mobile Units, NEP, of the sound damping and isolation.

The B unit also poses one of the major challenges facing production-unit designers and engineers: how to handle heat load from systems that are increasingly the equivalent of massive computer-server rooms on wheels. And the 80,000-lb. legal weight limit for a production unit always requires a delicate balance. For example, adding air-conditioning to deal with a heat problem means more AC weight, which means that some of the heat-generating gear needs to be removed to meet the weight restriction. But that, in turn, lowers the need for air-conditioning because there is less heat-generating equipment in the truck.

“We have 45 kW of tech power in the B unit so it needs some serious air-conditioning,” said Signorino. “We modified the design so the high heat load is in the front of the truck.”

Levine notes that that modification was first used three years ago in the EN1 unit. Putting much of the heat-generation equipment in one trailer not only helped keep the other units cooler but also reduced the number and length of interconnects.

“The EN1, ND1, and SSCBS trailers have all been collaborations with the networks,” he pointed out. “Our design teams were pushed by those individual clients so each trailer gets a little bit different. We’re very open-minded to taking on new ideas.”

The C unit also reflects some of those design changes. Housing a 15- x 27-ft. replay area and as many as 18 EVS operators, it has two 12-channel XT3 units, four eight-channel XT3 units, a six-channel XT3 SpotBox, and five XHub3 sharing networks. Flex space within the trailer allows personnel to handle transmission, editing, or virtual-graphics and other systems.

“The unit also has IP and Cisco connectivity back to the B unit [which houses the EVS XT3 servers],” says Signorino. “There is also a Think Logical KVM system with 320 ports and support for 6.5 Gbps.”

The non-expanding D trailer can be used for overflow EVS operators (as many as 25 operators can work on a production) as well as additional edit facilities and voiceover needs.

Another important innovation is that the facility is IP all the way out to remote locations on a golf course or in a stadium. Dante audio — using a combination of software, hardware, and network protocols to deliver uncompressed, multichannel, low-latency audio over a standard Ethernet network — and the ThinkLogical KVM system provide flexibility, delivering uncompressed, high-resolution video, audio, and peripheral data on a single stream over a single duplex fibre or single CATx cable. SSCBS is also the first mobile unit to use the RTS Omneo intercom, allowing the entire intercom system to be networked — even from remote towers, booths, or other trailers — without the need for DT12 cabling.

“You can conceivably run an EVS replay system from the announce booth by just plugging into the KVM and calling it up,” said Signorino.

Given the comfort level the NEP integration and design team has quickly found with IP, clients can expect IP to be a part of future production-unit builds.

“Without coaxing, we probably wouldn’t have gone IP and waited for the technology to get a little more mature before we jumped off the cliff,” said Signorino. “But it is working well, and we feel comfortable with it.”

Added Levine, “No one knows what the future brings, but we do know that IP-based production is down the road and that other equipment will show up with IP connectivity. So we’re going to move forward in that direction.”