SMPTE 2110, NMOS, AES70 and others aid in increasing adoption for broadcast sports

Networked audio has left the novelty stage behind and is moving into its own maturity even as its evolution continues, hastened by the rapid rate of development around standards.

“There have been some additional considerations with regard to interoperating in a SMPTE 2110 context, and we’re happy to say we fully support these,” says Kieran Walsh, director of application engineering, EMEA, Audinate, referring to recent additions to the suite of 2110 standards, such as 2110-30 and -31. 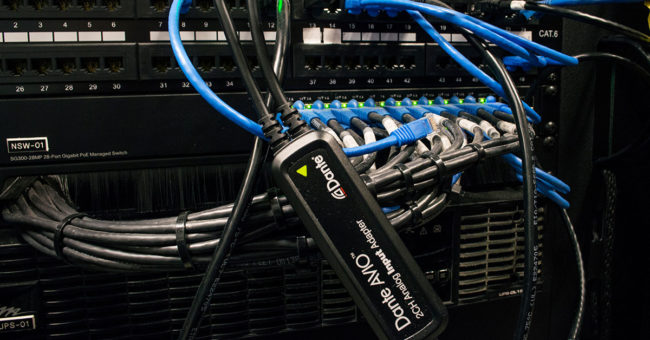 “Dante devices are able to operate with the extensions required to exchange audio information with SMPTE 2110-30 devices, whilst maintaining the additional benefits of the Dante ecosystem. This has led to fully featured networks accommodating the enhanced feature set that comes with Dante-to-Dante device communication, whilst simultaneously operating in a wider SMPTE 2110-30 ecosystem on the same network infrastructure.”

He cites recent Super Bowl halftime events as a progressive marker of networked audio’s evolution vis-à-vis broadcast sports: “When you look at the systems diagrams of those events, you see networked audio being used more and more each year, and that kind of reflects its adoption across broadcast sports in general. Once a Dante system had become the entire backbone of the audio, you see how large and complex an audio network can become and the benefits it can bring with it.”

White says channel counts, which now routinely number in the hundreds and which could theoretically be accommodated into the thousands, are the most visceral evidence of networked audio’s advantages.

“That’s also what’s really propelling it,” he explains. “As the networks move to fiber, you saw them start to experiment with eight channels, then 16, then dozens and then hundreds. Networks are now the only way to distribute a lot of audio over a large sports campus for broadcast.”

Evolution continues. Device synchronisation is among the most recent functions to have been addressed.

“SMPTE 2059 gives a clear baseline for device synchronisation, and a Dante Domain is able to synchronise with an external clock generator that supports this profile or utilise a Dante-enabled device as the master for the profile,” Walsh explains. “More complex synchronisation configurations are, of course, supported, and this is an architectural hurdle — and an understanding hurdle — to overcome, rather than a technical one.”

Challenges remain. “As channel counts continue to grow, simply managing the traffic is a problem,” says White. “The standards are looking at that, but many people suggest they aren’t being specific enough.”

That is being addressed, he believes, by a combination of proprietary solutions, such as Audinate’s Dante Domain Manager, by improved best practices, including better network design, and by newer specifications like NMOS and standards like AES70.

Ready for the next generation

A combination of the pandemic and the rise of esports — two phenomena that were initially discrete and are now increasingly synergistic — could positively affect the progress of networked audio.

“They’re both creating a need for an entirely new infrastructure that might not be what traditional broadcast is used to,” says White. “Between the number of channels of audio required, the increasing amount of [data] traffic, the need for more-creative or unconventional forms of audio distribution to the talent, PA system, live audience, OB trucks, etc., only a network could handle that.”