Next Generation Audio Summit 2018: Progress in personalisation, immersive audio and AES67 under review 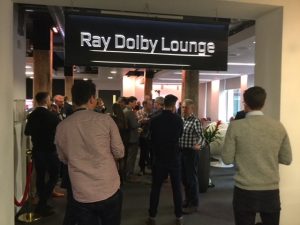 Networking drinks at the Next Generation Audio Summit, 31 October 2018.

As ever, sport is proving to be one of the earliest adopters, with immersive audio contributing to some truly revelatory productions this year, encompassing sports ranging from football to Formula 1. Simultaneously, sports production is also providing a backdrop for some of the most exciting developments taking place around the delivery of a more personalised audio experience, allowing viewers to achieve an overall sound picture that is more favourable to their own preferences.

This year’s Next Generation Audio summit reflected all of these developments, with particular highlights including: a Sky Sports panel examining the broadcaster’s groundbreaking deployment of Dolby Atmos, chaired by Robin Broomfield; a Keynote presentation from distinguished audio engineer, consultant and educator Felix Kruckels that considered his own immersive audio mixing experiences, as well as the implications that NGA has for broadcast audio training; an update on IP-based audio workflows, including the new revision to the AES67 interoperability standard, with a panel chaired by leading consultant Roland Hemming; and a look ahead to what the next few years are likely to bring for NGA adoption worldwide, with a particular focus on the challenges it heralds for broadcasters and sound suppliers.

Subsequent to the event, there was an opportunity to view a compilation of recent footage produced in Dolby Atmos, as well as the networking drinks and food that long been a staple of SVG Europe events.

David Davies, SVG Europe contributing editor and producer of the NGA summit, said: “The subtitle of the 2018 event was ‘from theory to reality’, and I think that reflects what has been a very discernible transition over the last 1-2 years. From the starting point of an initial cluster of trials and demos, immersive and object-based audio technologies are now being deployed widely for a whole host of broadcast content. In tandem with 4K/UHD visuals, these audio technologies – frequently referred to collectively as Next Generation Audio – are in the process of taking the at-home viewing experience to a new level.

“As one of the companies at the vanguard of this trend, it is entirely logical for SVG Europe to partner with Dolby for the NGA summit. Once again, it was great to collaborate with the Dolby team on this year’s event, and we look forward to addressing some other emerging aspects of NGA – including its implication for OTT services – in 2019.”

A detailed report on the Sky Sports panel, as well as a long-form piece on the other sessions, will appear on the SVG Europe website and newsletter early next week. A series of video interviews with speakers and audio sponsors will also be posted to the SVG Europe YouTube channel – lookout for a story about that on the SVG Europe, too.