NBC Sports’ operations behind its coverage of the Olympic Games are mind-boggling in both scope and scale and have changed dramatically over the past few decades. More linear coverage, the move to HD, the advent of digital, and at-home production have turned Olympics production and viewing on its head. Changes to transmission and the move to fibre have helped make NBC Sports more efficient and productive than ever. Next winter’s PyeongChang 2018 Games promise to continue that trend. 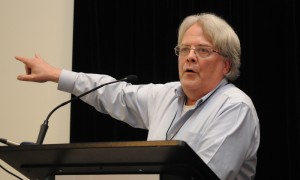 The last time the Olympics Games were in South Korea was 1988. Then, it took the NBC Sports operations and engineering team nearly a year onsite to set up its section of the IBC and get the facility up and running. For PyeongChang 2018, the team will head to South Korea at the end of October: getting ready will take only 45-50 days.

The dramatic decrease in onsite setup time is thanks in large part to the move to fibre and to the ability to build much of the IBC’s infrastructure at home in NBC Sports’ Stamford, CT, facility. At the beginning of February, work began there on prefabrication and pre-integration for all systems, including transmission, editing, and IT. Around mid June, engineers will do a full test, simulating operations within the building as if the gear were more than 6,800 miles away in South Korea.

“We can be fully integrated and configured before we shut the stuff off, which we have to do on August 1 in order to put it all on the ocean and get it [to site] on time,” said Terry Adams, VP, IBC engineering, NBC Olympics.

NBC Olympics has a longstanding relationship with Sony’s Systems Solutions team and Project Management Office, which have helped integrate the NBC Olympics production compound and studio within the IBC for each Games since Sydney in 2000.

“You can’t possibly put a price on their institutional knowledge,” said Adams. “If we were to go with an entirely different group of people, we would add months back to the integration time.”

For transport, NBC Olympics will again go heavy on the fibre, installing a fibre highway. According to Adams, for anything outside the BOC core, it’s all fibre and no copper whatsoever.

“That tremendously sped up the integration time,” he said, noting that, with fibre, much less cabling is needed than with coax.

The system is based on 12-strand, single-mode fibre with MPO connectors. The network totals 144 and 72 trunks breaking out in fibre panels that will be located throughout the IBC. All fibre goes into a cross-connect frame, the key being that builders can drop two MPOs into an edit room in the facility. With that, everything will be aggregated through that cross-connect, including Avid storage, LANs, and video.

“You just drop the MPO in there, connect it up once, and you are done,” Adams explaied. “It has greatly sped things up.”

The IBC in PyeongChang is already under construction and, in an anomaly for most Olympics Games, progress on it and many of the venues are well ahead of schedule. According to Dave Mazza, SVP/CTO, NBC Sports Group and NBC Olympics, the venues “are in really good shape.”

As with many of the previous Olympics, NBC Sports will hold one of the largest footprints in the IBC, after Olympic Broadcast Services. The Peacock’s area will total 75,000 sq. ft. with two control rooms, 38 Avid Media composers across 17 rooms, and 380 TB of Nexus storage. All ingest will be done through Harmonic Media Decks, offering a whopping petabyte of storage. There will be EVS XT3 servers for playback and approximately 60 other assorted servers.