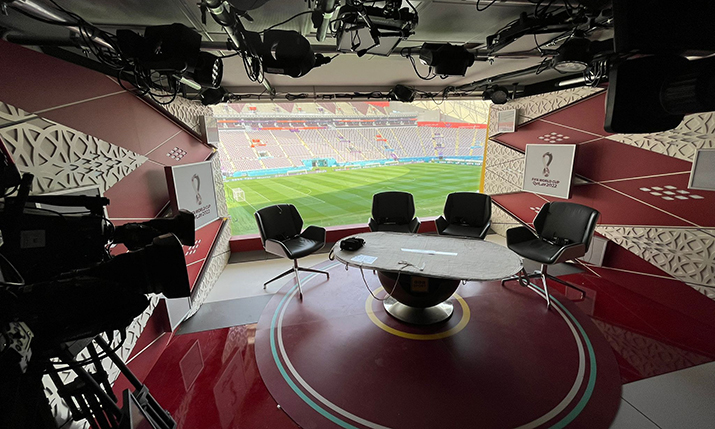 One of the eight Studio set ups for the World Cup in Qatar, this one at Khalifa International Stadium, showing the BBC set. [Credit: Duncan Bromley]

“This is one of our biggest and most complex projects to date. Timeline are providing end to end facilities for both the BBC and ITV Sport, as a joint operation for both broadcasters,” says Quinn Cowper, Timeline TV’s head of engineering.

Timeline TV is trailblazing with the provision of joint facilities and services for both ITV Sport and BBC Sport at the 2022 FIFA World Cup, delivering a more sustainable approach to the tournament, as well as providing cost savings for both broadcasters.

While BBC Sport and ITV Sport share the rights to the FIFA World Cup in the UK, this is the first time they have also shared the facilities across their IBC and venue facilities, which is causing something of a stir at the IBC in Doha.

Speaking to SVG Europe from the Timeline office deep in the IBC in Qatar, Cowper goes into the details behind the relationship between Timeline TV and its joint clients. “It’s caused a lot of interest here at the IBC because it’s unusual that a technical provider delivers facilities for two rival broadcasters at the same time.

“It’s a very strange feeling because when I worked on the World Cup four years ago, the IBC was absolutely jam-packed with people, but that’s not something we see now. It’s a much smaller operation at the IBC”

Sustainability was a key driver for the broadcaster’s decision to join forces in Doha. Cowper says: “The BBC and ITV Sport were clear in their goal that a shared remote production model was required to reduce travel as much as possible and to minimise freight shipping.

“By sharing everything from a core video matrix, UPS system, talkback and venue cameras, we have drastically reduced the equipment the broadcasters are sending out. This not only cuts costs but also significantly reduces the environmental impact overall.”

Timeline has sent a team of around 50 people to Qatar to run this complex project, compared to technical teams over three times that for previous tournaments. This delivers a huge benefit for the sustainability goals of both Timeline TV and the two broadcasters it is working for, alongside making the operational logistics much easier for an event where hotels and venue travel are a significant challenge.

Further savings are delivered as the broadcasters are sharing international connectivity back to the UK. As host broadcaster, FIFA has provided the match feeds and multiple angles per match. These feeds only need to be encoded once and sent back to the UK via diverse fibre routes, which then arrive at both Timeline’s Ealing Broadcast Centre where ITV Sport has based its operations for the tournament, and Dock10 in Salford where BBC Sport is based.

The operation is based around remote production with the majority of the technical and production staff in the UK. All the sound, replays, post production and graphics are remote, giving the comfort of working in purpose-built facilities as opposed to porta-cabins. 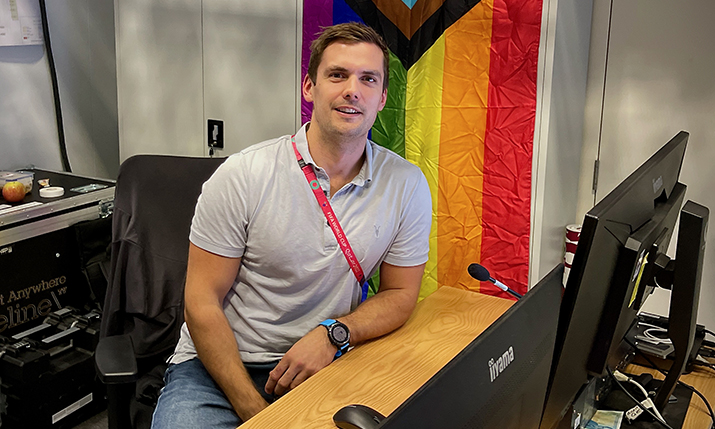 Quinn Cowper, head of engineering, is the lead engineer for Timeline at Qatar 2022

“There’s another step to this, which is that each broadcaster has remoted the vision mixer surface back to Qatar from the UK. This enables a small production team to direct the match from Qatar, adds Quinn.

This is a key part of the operation that enables the production teams to still have a presence on site with their presentation teams, which greatly aids communication across the project.

Cowper explains: “The main galleries are remoted back to the IBC where production [staff] cut on the vision mixer surface, remotely controlling the vision mixer frames that are based in the UK.”

Cowper continues: “We’re using Kahuna vision mixers, with the frames based in the UK but the surfaces are remoted. The team at Grass Valley have developed the system so the control surfaces can cope with the delay response across the continents to get the communication working.”

He goes on: “It’s a very strange feeling because when I worked on the World Cup four years ago, the IBC was absolutely jam-packed with people, but that’s not something we see now. It’s a much smaller operation at the IBC.” 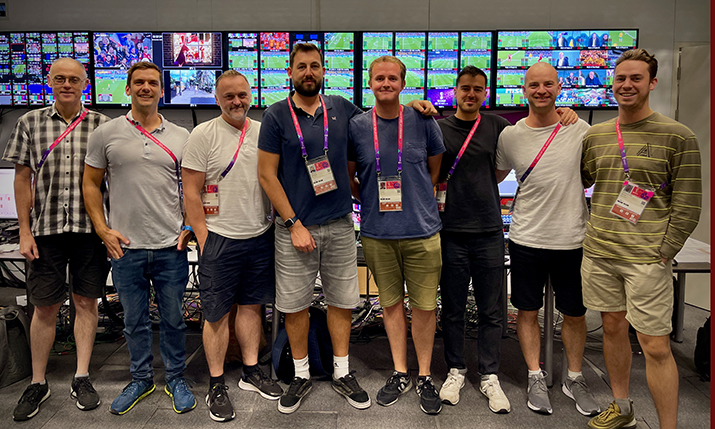 Timeline has provided identical venue kits for each of the eight stadiums in Qatar that were built and tested in the UK before shipping. Quinn notes: “Each venue has its own CAR based in a cabin that is centred around a Ross Video Ultrix Matrix and a Riedel Artist1024 Talkback Matrix. We then have equipment racks located in the studio position and at a pitch-side presentation position.”

The studio and pitch-side presentation positions are shared by both broadcasters, says Cowper: “So if ITV is presenting a live match, they will rig their set in the main studio. The BBC may also be at the same match to produce highlights and would present from the pitch side position. We can provide facilities for both broadcasters at the same time from every venue.

“Our EVS cerebrum control system enables the BBC or ITV’s MCRs at the IBC to remotely switch cameras from any of these eight venues down circuits to either Salford, where the BBC are based, or to Timelines Ealing Broadcast Centre, ITV Sport’s base,” he notes.

“The system has worked really well and delivered an extremely flexible solution that can match the production requirements, with no compromises”

On the control system used to enable remote switching of cameras, Cowper says: “We’ve built a comprehensive control system to enable remote tallies to be sent from either broadcaster to the cameras. The UMDs for the camera names are entered at the venue by the venue engineers, and that automatically appears on the production stack at whichever gallery is controlling those cameras.”

He adds: “Another feature we have implemented is remote racking from the UK. We have remoted the RCP control back to Ealing and Salford. Again, when we route a venue to a gallery, the camera control also follows to the relevant RCP control panel in the correct broadcaster’s, vision control room. Remote racking has been vital to reducing the number of staff required in Qatar.”

Cowper is particularly excited about the Riedel system in use for talkback. He says: “We have a Riedel Artist-1024 talk back frame at every venue connected by AES67 to two frames in the IBC and a frame at both the UK hubs. Again, the EVS control system enables any talkback to be routed automatically to the venue. We are controlling over 600 4-wires between the IBC, stadiums and remote hubs. This would be almost impossible to do manually, and we can switch a venue to a PCR with one button press. It’s a game changer in terms of the talkback but it requires a very solid network to provide this level of automation.”

Timeline is using Grass Valley cameras at the stadiums. “At each venue we have eight cameras distributed between the various presentation positions. We also have several match cameras for ISOs and close-ups,” Cowper says.

He goes on: “BMC have provided our circuits back to the UK over the FIFA-provisioned fibres using the Virtuoso platform by Nevion. We use J2K to get the multi-viewers back from the UK into the gallery at the IBC so they have very low latency. As you cut on the mixer, the picture’s changing almost instantaneously. The broadcasters can do a whole production as if they’re sat in an OB truck next to the stadium.” 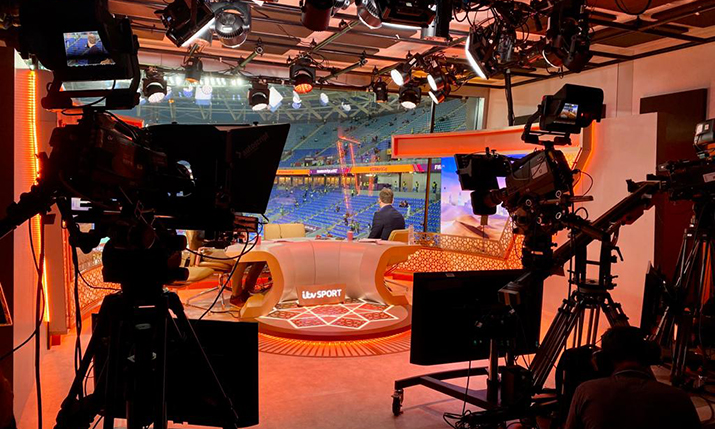 The studio at Stadium 974 with the ITV team on air [Credit: Grace Wordsworth]

Making sure everything went smoothly in the short period of time available to get the entire system rigged and ready to go in Qatar was key, notes Quinn: “So we built the entire system, all the galleries, the MCRs for both ITV Sport, BBC Sport and all eight venues, in our warehouse in West London where it was fully tested before being put on a boat back in September. This ensured every single venue was built, configured and tested identically before any facilities left the UK.”

Timeline TV hit the ground running in Doha. The IBC team arrived in Qatar on 28 October, giving them three weeks to build and complete the IBC set up. They were then joined by eight teams dedicated to the World Cup stadiums.

Each stadium team is made up of around five people, including a vision guarantee, sound guarantee, camera guarantee and a unit manager. The production crews, presenters and guests move from stadium to stadium, following the matches.

“Access to the stadiums was only possible a few days before the start of the first match day so each stadium had to be rigged, connected to the IBC and ready to go in a very short space of time, it was a stressful period for all!” says Quinn. “But thanks to that planning and pre-building time in the UK it’s overall been very smooth sailing in Qatar.”

Cowper comments on the situation for the day we spoke, Wednesday 30 November, when four matches took place: “So today we’ve got two simultaneous games happening in the next 40 minutes; they’re going to go out live on BBC One and BBC Two. The games will finish, and we’ve got a very short period to switch to the next two stadiums so the following two live matches can be produced.”

He concludes: “Delivering eight venue OBs, the shared IBC facility and the UK facilities at BBC and ITV Sport was a big task. The system has worked really well and delivered an extremely flexible solution that can match the production requirements, with no compromises. It’s one of the most complex systems that we have built, and we have had a great team working across it at both ends of the operation.”