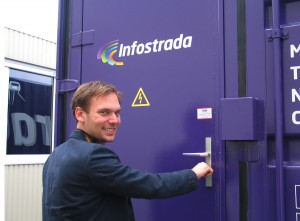 With the brand new reality TV show Newtopia, German broadcaster SAT.1 will commence what has been described as one of the most ambitious TV experiments of all time on 23 February. The concept of Newtopia was created by Dutch TV veteran John de Mol, who has already experienced significant success with the original Dutch TV version, Utopia, which garnered a daily average of 700,000 viewers.

Now, in the German adaptation, 15 pioneers will face the same challenge of developing a new society from scratch. Equipped with a cold barn, two cows, chickens and some farmland they are required to establish a new existence of their choice.

This exciting experiment can be watched in the prime-time on German TV but also 24/7 via four live streams. In Newtopia, which is taking place in a suburb of Berlin on a space once occupied the East German State Security, there is hardly any corner where the inhabitants can’t be watched by the 107 cameras. These include: 52 Sony BRC-Z330 cameras that are chosen for outdoors applications because they come with three different ND filters; two Telemetrics RoboEye cameras with a 18X zoom that oversee almost the entire area including the field and a pond; four Sony Alpha 7S cameras that deliver good pictures in a variety of light conditions; and 49 Panasonic AW-HE60s that can shoot with infrared in extremely low light.

The sound is captured in a similarly high-end style. A total of 21 Sennheiser MKH-50, 9 Sennheiser MKH-60 and 3 Rode NT4 stereo microphones record the ambient sound whenever a cow is mooing or a swimmer is whispering in the water. It is part of the deal that the inhabitants of Newtopia have to wear wireless microphones except in the water.

The complete technical concept for Newtopia was developed and equipped by the Dutch broadcast service company Infostrada Creative Technology, which had already created the technical backbone for Utopia. Before they could roll out the 15 kilometers of fibre optic cable, a ducted system had to be installed in order to lay cables for electric power, video, sync and control.

“Some cameras require fibre optic cables because the video signal has to be transmitted over a distance of more than 100 metres,” reports Casper Choffat, R&D manager at Infostrada. All the video and audio signals are routed to the technical center where they are changed to fibre optic so they can traverse a longer length and be made immune to lightning.

As production company Talpa wants to guarantee its viewers the highest possible quality, Infostrada Creative Technology developed a complete HD workflow in just one single container. After building the MobileDatacenter from scratch and shipping it to its location in Germany it was a matter of plugging in all the connections. In an hour the MobileDatacenter was up and running with the full security and redundancy to tackle any unforeseen situation it might encounter. It doesn’t end there as not only the connections can be made on the terrain of the inhabitants; it’s connected remotely to Hilversum where all systems are monitored live and continuously.

The heart of this innovative project is the Infostrada MobileDatacenter in a huge container which is 24/7 monitored by the Infostrada HQ in Hilversum via a fibre optic connection. The data centre is a maximum security unit in many different ways. Key data such as power, water, humidity and temperature are continuously measured, and in case of an emergency the 24/7 service desk in Hilversum is enlisted.

“Our IT team can even monitor a problem before the production realises that there is some interference,” explains Choffat.

The experienced Infostrada team oversees TV studios and post-production facilities in The Netherlands with about 250 editing suites. For almost a decade, Infostrada Connect has installed fibre optic cables used by Infostrada Creative Technology.

The MobileDatacenter for Newtopia is a sophisticated system with two power supplies. If the public power supplier has a problem, the 15 19” server racks get their energy from two UPSs that can run over half an hour.

“If that happens, a generator starts within ten seconds,” explains Choffat. Even the air conditioning system for the 60-plus servers is constructed in a redundant way with a total of four units, although the data centre could run on two air conditioning units.

An in-house development by Infostrada is the content management system Centralparq, which has been developed and optimised since it was launched five years ago: “We built a system that can automatically ingest the files and transfer them to the right place.”

While the video and audio files are stored on the Avid ISIS systems, the metadata is generated in Avid’s Interplay database.

“Based on this experience, we created a system for Utopia as well as for Newtopia,” says Choffat.

In order to stream four signals 24/7, the team of Infostrada Creative Technology created a unique concept with the MobileDatacenter for Talpa’s two directors and up to four directors of photography who are operating the cameras from the control room. The 107 camera images on the numerous monitors are marked with different colors so that it is easier to make distinctions between the various indoor and outdoor locations in Newtopia.

“Talpa Germany is producing two storylines at the same time,” reports Choffat. For this reason there is a storyline producer in the middle of the control room as well as two loggers who are tagging all the images and feed the metadata into the Centralparq system. This information includes the name of the Newtopia inhabitants, the location, situation and mood, but also the timecode so that the material can be recognised in the system.

“The storyline producer tells the directors where they have to focus. He is the one who has an overview of what is happening in Newtopia.”

Furthermore, the directors and the storyline producer are equipped with touchscreens so that they can select the candidates for the storyline, which is also crucial when it comes to the sound mix. While the loggers keep track of the people and locations, the touchscreens deliver the information regarding which voices need to be heard.

“We record all the 64 audio channels, but the sound mix is generated automatically through Centralparq, which is essential for the live streams and the rough cuts.” The primary advantage here is that in the final ProTools session, the sound engineer already knows which channels are required for the fine-tuning.

In total, there are 15 craft editors, four directors of photography, two directors, two loggers and a storyline producer who have to run the show. After three months of building the huge infrastructure, the first cameras were installed in December 2014. By the end of January, the whole system was delivered to Talpa Germany.

“After some tests and a hot rehearsal we had to re-position some microphones and cameras, and change configurations in order to optimise the workflow,” concludes Choffat, who was back in the Infostrada HQ in Hilversum when the first broadcasts of Newtopia went on air on February 23 at 7pm.