Save the Date! SVG Europe’s Sport Production Summit to take place in Amsterdam on 8 September 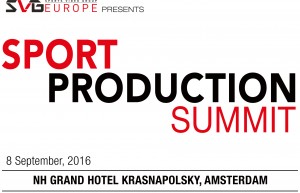 Hot on the heels of two successful events in Dublin (SportTech 2016) and Milan (Sky Italia Innovation Summit), SVG Europe has confirmed the dates of its annual summit and awards event taking place in Amsterdam before and during the week of IBC.

Traditionally a chance to take stock of new technologies shaping sports broadcasting, as well as some of the summer’s most significant productions, the Sport Production Summit will take place on 8 September. Once again, the venue will be the prestigious NH Grand Hotel Krasnapolsky. A full programme will be published in June, but it’s probably safe to assume that the EURO 2016 championships and Rio Olympics will feature prominently!

The Saturday evening of IBC has historically played host to the SVG Europe Sports Production Awards and networking reception – and that tradition continues in 2016, with this event taking place on 10 September. Once again, the Awards will recognise some of the year’s most exceptional achievements in sports production.

Registration for both events will open shortly, so keep an eye on the SVG Europe site and social media feeds.