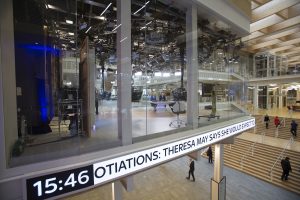 Following a review of operations in 2016 and the decision to refurbish the news studio, Sky made the decision to introduce production automation as a way of improving the consistency of the channel’s content – and then set out to find an appropriate technology partner.

Jack Horry, Sky’s project lead at the Isleworth studios near London, was initially concerned with the issue of integration. “There were a number of different vendors involved in this project and many of them were providing custom applications, so we were concerned about how any automated production control (APC) system would integrate with the different solutions on the table. We already knew that OverDrive is a popular product and is widely-used, but interoperability was obviously an important issue for Sky. Fortunately, the Ross OverDrive development team spent a lot of time with us and they were happy to talk about roadmaps to the extent that some specific features we asked for have now been incorporated into the mainstream product. We’re extremely pleased with the results and we’ve seen a definite improvement in consistency while still giving us the flexibility we need to introduce breaking news or make changes to the rundown quickly and easily”.

“For Sky News, no reduction in flexibility would have been acceptable”, according to Scott Bowditch, director of business development for OverDrive at Ross. “From the beginning of the process, it was clear to the operations and engineering stakeholders that OverDrive is a very powerful product and can automate even the most complex workflows. OverDrive is designed to be ‘newsroom friendly’ and to take account of the fact that news is inherently dynamic and fluid. OverDrive has actually increased Sky’s ability to address late changes and breaking news more quickly and efficiently than ever before without comprising the rest of the rundown.”

Oscar Juste, director of Sales for EMEA, sees the relationship with Sky as an important milestone for Ross: “We’re delighted to be working with Sky and this deployment is another important feather in the Ross cap for Europe; we’ve seen consistent growth of over 30% year on year in the region and, with our new EMEA HQ facility in Reading, UK, and further additions to the team, we’re on a very positive path right now. We couldn’t do that without great products and forward-thinking customers who help us improve them; Sky is no exception”.

BBC Sport unveils innovative new VR studio for Beijing Winter OlympicsDiscovery lines-up improved expert analysis and an updated Cube for Beijing Winter Olympics coverageSky Sports and DP World Tour extend broadcast partnership in the UK and Irelandarkona renews Gold SVG Europe sponsorship in ‘pivotal year’UHD and beyond: Tedial on maximising the content opportunity in 2022Video assistant referee basics: Slomo.tv on why choosing the right codec for VAR systems requires special attentionEmerging technology: Cobalt Digital extols the virtues of affordable HDR conversion with SL-HDR1 metadataBlackbird swoops on SVG Europe Gold sponsorshipGoal Probability graphic to be added to replays in LaLiga coverageSeismic shift: MRMC on the potential of robotic camera systems to next generation remote productionBuild it and they will come: Cerberus pinpoints the challenges and opportunities of sports broadcasting fragmentationCapturing the cloud: Singular.live on why change is now constant in sports broadcasting
Read more