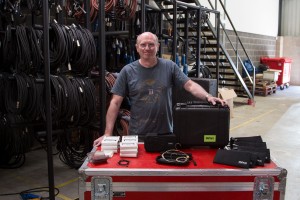 Sky Cricket, Presteigne Broadcast Hire, FAC365 and CTV Outside Broadcast are among a growing list of companies who have reportedly made DPA’s d:screet Miniature Microphones their first choice for capturing television presenter commentary and dialogue. Over 200 microphones were traded-in during UK distributor Sound Network’s recent campaign.

Sound quality was one of the key reasons why many broadcasters made the switch to d:screet 4060 Hi-sens Miniature Microphones.

David Handley, audio engineer at Presteigne Broadcast Hire, says: “We’re finding that more of our clients are demanding the highest quality mics to match the best quality radio packs, so much so that we’ve had to increase our stock of d:screet 4060s to over 100 units.”

With very low noise and extremely high sensitivity, DPA microphones are ideal for situations where a clear, transparent and natural sound is required. They are capable of handling up to 154 dB peak before clipping and thanks to their linear response and large dynamic range, they deliver consistently great sound, no matter the application. Their tiny size also makes them ideal as lavalier, lapel or tie clip microphones – or they can be hidden in costumes where they are virtually impossible for viewers to detect.

d:screet Miniature Microphones have always been robust, but recent upgrades by DPA to their cabling have made them even more durable and able to withstand the rigours of a live or studio broadcast environment. This refinement has proved very popular with customers, including top broadcast rental companies such as VME.

“No one questions the sound quality of a DPA, but there have been some concerns about durability, which these upgrades have put to bed”, says VME director Dion Davie. “We supply equipment to all major broadcasters, particularly for sporting events which can be challenging environments, but the d:screet mics now cope admirably with everything that’s thrown at them – no brainer!”

Davie’s views are shared by Ian Smith, sound engineer for CTV Outside Broadcast, a company that specialises in major outdoor sporting events such as the Open Golf championship.

“Sport presenters can get pretty dynamic, and DPA’s d:screet Miniature Microphones seem to take everything in their stride, including their sometimes abrupt handling in the studio,” he says “Our clients are very reliant on them working trouble-free and we have found the new reinforced cables to be totally reliable.”

Mike Hayes, director of Manchester-based broadcast rental company FAC365, believes DPA should be praised for the recent refinements it has made to its d:screet range.

“The d:screet 4060 miniatures have always delivered the best sound and extremely high SPL capabilities,” he says, “and now with their improved durability they are rapidly becoming the default choice for Sound Supervisors across the industry.”

Tim Rowden, head of audio at outdoor sporting events specialist Arena Outside Broadcast, agrees. “DPA have continuously appraised areas for improvement in their products and have spent time and resources into eliminating any weaknesses,” he says. “The 4060 miniatures have always delivered the best sound, and now with their improved durability they have become the obvious choice.”

Jason Watts, sound supervisor for Sky Cricket that handles all of the cricket coverage for Sky Sports, adds: “d:screet 4060s are my first choice for miniature lapel type mics; they sound great, look neat and have a high output which is beneficial for us. We even use them as stump effects mics because they can handle high SPLs.”