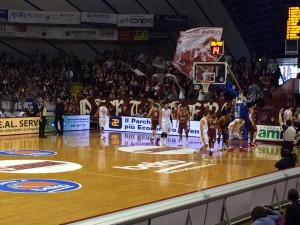 At NAB Viaccess-Orca, a company in the protection and enhancement of content services; Harmonic, a leader in video delivery infrastructure; and VideoStitch, are showcasing their virtual reality (VR) solution currently being tested by pay-TV operator Sky Italia to broadcast basketball. The trial, powered by VR technology from Viaccess-Orca, Harmonic and VideoStitch, is designed to provide Sky Italia viewers with an immersive, engaging, and personalised television viewing experience.

Segments of the recorded broadcasts from the trial are being shown as part of Viaccess-Orca’s Virtual Arena demo during the 2016 NAB Show at the Harmonic booth SU1210.

“The VR ecosystem offered by Viaccess-Orca, Harmonic and VideoStitch is flexible, enabling us to streamline installation and our overall workflow without compromising the video experience. We also particularly like the fact that by partnering with well-known premium content management and distribution specialists, we are in the best position to offer quality experiences.”

Specifically adapted to sports content distribution, with an emphasis on boosting fan engagement, the VR solution trialed by Sky Italia also benefits from compatibility with industry standards. The satellite operator has the flexibility to leverage existing investments in equipment and lower its CAPEX. The VR solution offered by Viaccess-Orca and its partners is pre-integrated, which allows content owners and pay-TV operators, such as Sky Italia, to quickly deploy VR services and gain a competitive edge in the marketplace.

“Sky Italia is a long-term Harmonic customer for broadcast and OTT applications,” said Thierry Fautier, Vice President of Video Strategy at Harmonic. “Together, on this project, we will set a new standard for amazing video experiences by exploring modern applications such as virtual reality. Harmonic’s advanced media processing solutions are capable of delivering Ultra HD video content to a variety of devices with superior video quality at low bitrates. The integration with Viaccess-Orca and VideoStitch equipment made the project run smoothly and is easily deployable for future events.”