“SportsCenter has been a huge success: over 17 million people a month tune in to SportsCenter on Snap,” said Nick Bell, vice president of content, Snapchat.

“What’s more impressive actually is that, of the 2.5 million people that watch every single day, 70% of those come back at least three times a week. It’s really about building that habit. Snapchatters are opening the app many, many times a day, and they’re tuning in to content like SportsCenter. It’s becoming the home of sports for the next generation.” 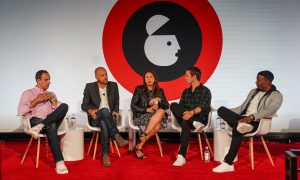 Bell was speaking at Advertising Week New York last week, explaining how sports-viewing habits are changing, especially for young fans, and the social-medial platform is leading the way with a new kind of fan experience.

Besides the viewing experience, Snapchat gives users an opportunity to share the moment and their feelings about it. The platform offers produced content on its Discover page but also provides the creative tools for fans to shape their own message. Adding filters is a big part of the appeal. During Super Bowl LII, Snapchat videos with filters logged 577 million views, Bell said. That doesn’t happen only at major events, he noted: the platform even offers custom filters for high school sports.

Leagues have been quick to sign on. Snapchat now has partnerships with more than 100 sports organisations, including the major leagues, broadcasters, and event organisers.

Moderating the AW New York talk was Andrew Hawkins, former NFL wide receiver and current host of SportsCenter on Snapchat. “What makes SportsCenter on Snap successful,” he said, “is the fact that we’ve stayed true to what SportsCenter is, while creating a show which is just right for Snapchatters.”

The use of Bitmojis is one way fans customise their Snapchat experience, Bell said, noting that 36 million people have added some kind of fan accessory to their Bitmoji character. To demonstrate the platform’s scale, he noted that users send more than 3 billion snaps daily, which is greater than the total number of photos taken on an Apple device each day.

Watching video on Snapchat is a mobile experience, and the platform brings its mobile expertise to its sports partners so that they can better please their fans.

“Mobile is unforgiving. People want to get straight into it,” Bell said. “We’ve taken everything that we’ve learned from how Snapchatters are communicating, and are now working with major leagues, like NFL, like the NBA, to bring highlights to our fans on Snapchat. We’re delighted with the partnerships we’ve got: NFL actually has a product now where, as the games unfold, the highlights are updating. We’re really proud of that product, and it’s been a huge success.”

NBA EVP, Digital Media, Melissa Brenner explained that, with only so many hours available to the league on linear TV, Snapchat lets it extend the broadcast window and tell stories it wouldn’t have time for. Two-thirds of the NBA’s fans on Snapchat are under 24. She likes to say that fans watch a game on TV but experience it on Snapchat.

“There’s a lot going on this season,” she added. “Using extensions like shows on Snap has been a really great thing for us to further the storytelling of the league. Whatever Snap’s selling, we’re buying.”

“I give credit to Snapchat’s content and publishing team on this one,” he said, “because they invested time and understanding in the way we work, which is different from the NBA or a lot of the American sports. We got to the point where we could use our brand in a lot more dynamic and creative way. We also could offer opportunities for our stakeholders, for our sponsors and broadcasters.”

FIFA signed a one-month partnership with Snapchat during the World Cup, sharing its stories and also those of its sponsors.

Last on the panel was Overtime, which has created a hit show on Snapchat that plays like Tosh.0 for high school sports. Chief Content Officer Marc Kohn credited analytics and one-to-one meetings with Snapchat’s content specialists in helping his company sharpen its delivery.

“For this generation, a great play could be a trick shot from the top of a bridge,” he said. “It could be a kid dancing in the middle of class. We’re trying to lean in to a lot of that part of things.”

Young people still watch sports, but they want to see it in a connected and sharable format that reflects their interests. Hundreds of sports partners and millions of viewers suggest that Snapchat is on the right track.