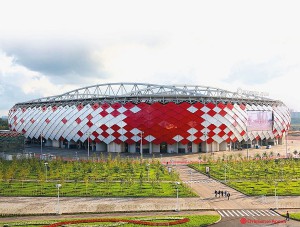 Broadcast Solutions has successfully planned and delivered a sophisticated broadcast and multimedia infrastructure to Otkrytije Arena, the new home of football club Spartak Moscow. The arena should enable its investors to develop new revenue streams by using flexible and modern technology. Additionally all technology had to be planned in compliance with FIFA regulations since the stadium is a venue for the FIFA World Cup 2018. The first event that took place in the arena was an opening football match in September 2014 and proved all systems were working properly.

Furthermore the company analysed the investors’ needs and supported the planning team with its expertise when it came to entertainment, broadcast and multimedia solutions — proposing a single media content management system, allowing maximum profit from advertisement and distribution throughout the whole arena. All audio and video systems are managed by one multifunctional control centre.

Basic considerations in planning the stadium’s concept and profitability focused on the flexible use and distribution of all available multimedia content to available and future channels. This resulted in the construction of a combined broadcast and multimedia system under the management of one Media Control Room. The TV broadcast infrastructure includes 4K, HD-pre-cabling with 37 camera positions, eight TV studios, press area, mixed area, flash interview area, commentary positions, and equipping the TV-compound with stadium termination panels.

All multimedia systems are managed in phase including giant LED video screens, LED pitch perimeter, public address audio system, mobile-TV as well as social media. The eight-channel stadium TV together with digital signage are distributed across any combination of screens and zones to 170 LCD screens within the arena.

The Media Control Room offers workplaces for editing and inserting extra messaging from sponsoring partners that can be displayed over all distribution channels. Possible locations for individualised content delivery could be waiting areas, catering, VIP-lounges, info-points or commentary stations.

Additionally visitors have access to selective content via an implemented WIFI network serving up to 20K simultaneous logins. Feeds for Spartak Moscow’s several online and social media channels is also handled by the Media Control Room.