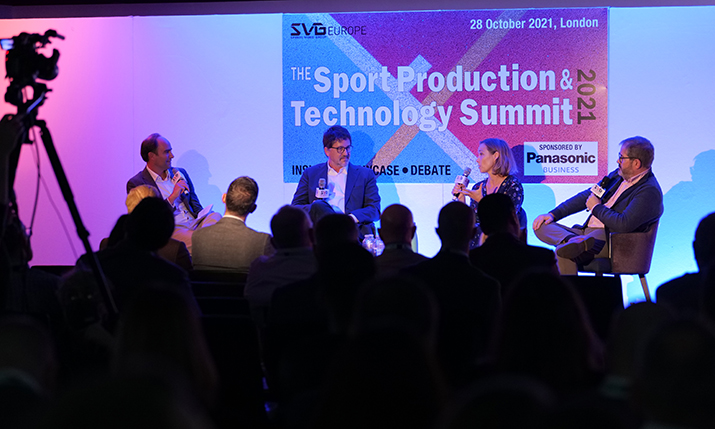 It almost goes without saying that the pandemic accelerated the introduction of automated and remote production workflows and web-based technologies, but a lingering side effect has been to exacerbate an industry-wide skills gap.

Sky Germany SVP of sport production Alessandro Reitano, moderating, issued a call to action. “This is a war of talents,” he said. “Cloud, IP, SaaS and data have all helped us continue to work and deliver live to air this past 18 months, but now the focus is on people and skills.”

Sky Sports executive director of production services and operations Inga Ruehl validated this. “The organisational, cultural and skills piece is very important. There’s a real challenge around talent in the industry. We have some amazing people, but we need to train, upskill and bring in more.”

Mediapro CTO and operations manager Emili Planas Quintana said his company was competing with major tech companies like Google. “The shortage is a major problem not just for ourselves but for the industry as a whole. The problem is how we can get everyone in the chain involved, from technicians to producers and TV directors. Everyone needs to learn what they can do with these new workflows.”

“There’s a real challenge around talent in the industry. We have some amazing people, but we need to train, upskill and bring in more”

Trevor Turner, F1’s head of new technologies for broadcast and media, said that the abstraction from the technology that comes with virtualisation and kit like surface panels can oversimplify what is a highly complex set of signals under the hood. “We need to know every last mile of our connectivity from track to facility otherwise you leave yourself open to risk. We do have a relatively young team and train them up quite quickly and allow them to follow their aspirations because that’s the best way for people to ask questions.”

Formula One has begun taking steps forward from remote production into cloud and IP 2110 workflows. It is building a new fixed installation at its UK facility and it started out with an ST-2110 roadmap with a new MCR last winter.

“There was nervousness about our team not knowing enough about IP to monitor feeds for distribution to the world,” admitted Turner. “We don’t have the time or opportunity to put more formal courses together so we rely on manufacturers to handhold us. Initially our engineers were wary of the tech but over the course of the race season they are now much more comfortable with it.”

By the same token, Turner called on those on the network side to understand core broadcast skills. “They need to know why PTP is important to us and why we are concerned about proper orchestration, the impact of latency change on the network and the implication of lost packets. It cuts both ways.”

He added: “By being early adopters of technology we find we can retain most people because they can see a roadmap to stay with us and progress their career. It is recruitment that’s tough.”

It is not just technical skills from IT though. Quintana gave an example of the changing skillsets of camera shaders. “When we work in UHD HDR the shaders need different skills. We need to teach them away from waveform – the traditional way of operating in SDR – to become less technicians and more creative people. The type of people with the right sensibility come from cinema but it is complex to operate live systems and they lack the technology knowledge. We need talent with both skillsets.”

Sky’s Ruehl agreed: “It’s not in our business to be an educator although we have been doing training in pockets, such as in sound. We find we’re having to slow things down right now because of the skills challenge. Yes, people want to work in sports but it’s traditionally appealed to certain groups and we’re not seen as a place for all. We need to do more to proactively go out and attract the younger generation into the industry.”

COVID, of course, has permanently changed workflows and the executives talked about how their operations have shifted from the initial scramble to using remote and automation and hybrid in a more concrete fashion.

Ruehl spoke for everyone when she said: “We did in six months what had been planned for two to three years. Our tech teams were having the time of their lives; no-one was saying you can’t do this. We relied on the technology we already had to reduce the number of people we physically move around and now we’re pushing it further.”

Turner explained that F1’s ability to rapidly adopt remote production in the early phases of the pandemic was due to having laid the groundwork with tests including at Barcelona in 2020, before the calendar was cancelled.

“Fundamentally, our philosophy was not to change workflows. We have a successful formula for Formula 1 built over 20 years into a slick operation. When COVID struck we had to plan to restart, to safely send a lower number of people, and what we did was effectively scale our Barcelona test. We still have to send cameras and audio and have people produce and manage that, but the secret is connectivity and better compression techniques to get the volume of material back to the UK for production. The pandemic also accelerated our use of cloud to distribute signals; we’re still at the beginning of that journey.”

Quintana suggested that the use of remote web-based production and distribution tools had levelled the playing field between what was nominally a tier 1 and a tier 4 sports production value.

“The fan doesn’t know or care about tier 1 or 4. A tier 4 customer also doesn’t want an incident on their stream. This is the challenge. At end of the day whether you are switching 20 or 50 cameras for tier 1, the tier 4 single camera stream must also be of high quality.”

That said, the challenge will be how to manage new remote production workflows alongside the traditional OB. “Probably for tier 1 we will use some remote production for some specific workflows but overall things will not change much for the next two to three years,” Quintana added.

The panel came around again to skills and culture and the task facing an organisation needing to bring everyone with them on an IP transformation.

Reitano said: “The problem is pressure on budgets plus the need to attract new target groups and you have to tell the editorial team to adapt to new workflows basically to achieve more with less.”

Ruehl tied this into the global issue of sustainability. “People feel proud if the things they do have a lesser impact on the environment,” she said. “But there is – or was – a whole attitude around travel. Editorial didn’t want to stay back home, they wanted to go to the venue. This is changing. There is greater understanding that there are so many ways of delivering content but we have to find cheaper and more sustainable ways of doing that.”