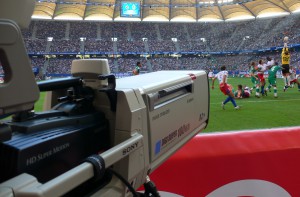 “In general we are producing the matches with the same camera and audio concepts as last season,” says Tim Achberger, Sportcast, executive assistant. “But we always try to integrate new technologies into the production so this year we will use a six-times super slo-mo system during our top matches and we often add special cameras for the top matches. Also this season the Bundesliga begins to use the Hawk-Eye goal system, so we have to focus on the integration of that system into our broadcast environment.”

Eighteen matches are produced every match day: nine each for Bundesliga and Bundesliga 2. Sportcast has a full-time staff of 60 that oversees the relationships with rightsholders, contribution and distribution of matches, and the coordination of freelance production teams of approximately 55 people per match that create the video and audio signals at the core of the coverage.

“We have a workshop twice a year to communicate the aspects of the editorial guidelines for the world feed. For example, we discuss about the usage of super slo-mo,” says Achberger. “We want to focus more on technical abilities of players rather than fouls. So we define fixed guidelines for the editorial staff to create a unique signal which makes a further elemental contribution to the brand marketing of the Bundesliga.” 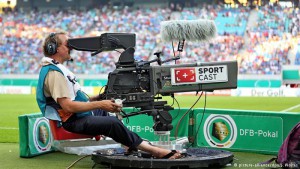 A total of 18 matches are produced every match day: nine each for Bundesliga and Bundesliga 2.

The DFL Deutsche Fußball Liga GmbH, based in Frankfurt, has three subsidiaries: the DFL Sports Enterprise that handles rights for international rightsholders based in Frankfurt and then Sportcast and DFL Digital Sports, both based in Cologne. Sportscast handles the host broadcast productions and distribution over fibre and satellite, while DFL Digital Sports handles the editorial side of things and also creates content for distribution on the Bundesliga Website, the Bundesliga YouTube channel, or social media platforms like Twitter.

The Sportcast Production Center located within the Cologne Broadcasting Center (CBC) is connected to each of the venues via the Bundesliga Fibre Network that was installed in early 2015. The fibre paths transport video signals as well as data services, communications, telephony and Internet traffic between the venues and the Sportcast Production Center.

Video signals are transported at a data rate of 250 Mbps and in the JPEG2000 compression format. The SNG provider HD Sat Communication GmbH, a 100% subsidiary of Sportcast based in Berlin, transmits a backup of all basic TV signals from stadiums via the satellite Eutelsat 7B, which is supplied by Eurovision. MPEG-4 compression has been used for satellite needs since the 2013/14 season and all signals are available in 16:9 HD. 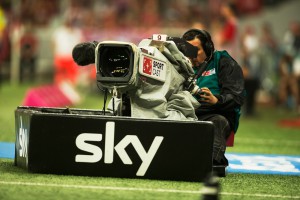 Sky TV camera in action during the Bundesliga match between FC Bayern Muenchen and Hamburger SV at Allianz Arena on August 14, 2015 in Munich, Germany. (Photo by Johannes Simon/Bundesliga/DFL via Getty Images)

“We work with the same pool of [eight] OB providers and editorial staff for both leagues,” says Achberger of a move that maintains a consistent look and feel to each match. “High quality needs perfect teamwork, especially with the enormous complexity. As the coordinator we trust in a range of reliably and highly professional partners and, together, they guarantee the highest precision and constant production reliability.”

With respect to microphone placement, a main microphone generates a “surround” atmosphere from the stadium and forms the basis for multi-channel sound. As a result it is typically placed on a “lively” tribune.

Microphones placed on the sidelines, meanwhile, capture the atmosphere on the field. For this purpose, shotgun miss are used an allocated on all sides of the pitch. In addition, spot microphones are placed behind the goals as well as at facing the fans in the tribunes in order to record chanting and singing.

Meeting the needs of rightsholders

Sky Deutschland is the primary rightsholder within Germany as it broadcasts all 612 matches. In addition, ARD has occasional matches as well as relegation matches and a weekly highlight show. Top international clients include Fox Sports (delivering matches to 81 countries, including North and South America), StarTimes (49 countries in Africa), BeIN Sports (26 countries in the Middle East), and Eurosport (23 countries in Northern and Eastern Europe).

One of the big changes has been expanded English commentary and pre-match coverage as, increasingly, international rightsholders want to show more matches and things like the team buses arriving at the stadium as well as the fans in the stands prior to the match.

“Last year we produced five live matches per match day with English commentary and international live match graphics. In this season we will produce all nine matches,” says Tim Achberger.

The world feeds are available via satellite and the BT Tower in London. World feeds this year have also been expanded to 210 minutes this year, giving rightsholders the ability to show the team’s arrivals by bus an hour before the start of the match.

Beside the live matches rightsholders also have access to two 52-minute highlight shows that are created every match day and are available with English commentary, graphic, and interviews. Other offerings include a Bundesliga Weekly preview show, a 15-minute international interview one hour after a match, 11 digital highlight clips, and Bundesliga Match day clips. 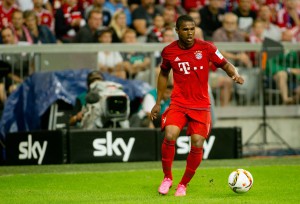 Douglas Costa of Muenchen in action during the Bundesliga match between FC Bayern Muenchen and Hamburger SV at Allianz Arena on August 14, 2015 in Munich, Germany. (Photo by Johannes Simon/Bundesliga/DFL via Getty Images)

Like many production companies that find themselves in the centre of a host operation, technology innovation is all about meeting the needs of rights holders and helping them improve the quality of storytelling for a match.

“Getting an innovation into the production needs a long time as it has to first enhance the quality of the production and also needs to be tested,” says Achberger. “We have done a lot of research with the German Sport University of Cologne to see how you can improve the quality of a production and people watching a feed always realize if you change elements like a new camera perspective. And if you change something too fast you’ll get instant feedback from viewers. So if you want to do something new you need to do it in small steps to see if it works out and can be integrated.”

The next step in terms of UHD advances by Sportcast will rely heavily on what Sky Deutschland would like to do. Achberger says there is plenty of development still needed to make UHD practical in terms of a consumer service that could truly be embraced by consumers. But testing will most likely continue and high dynamic range (HDR) also holds much promise.

“Sky is the driving force in the field of 4K production development in Germany. We also produced a 4K match with several partners in May filming a match with 11 4K cameras,” says Achberger. “But the main goal for Sportcast is a synergised production of 4K and HD and, therefore, we need further development in different product areas.”