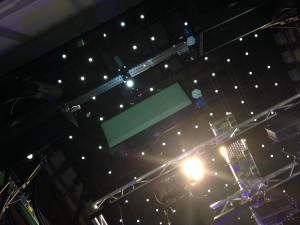 The StarTracker systems, which are mounted on a Vinten pedestal and to a Mo-Sys e-Crane, were used for augmented reality graphics during the studio production.

StarTracker utilises retro-reflective stickers that are randomly attached to the studio ceiling. The stickers – the ‘stars’ in the sky – form a map that is key to locating the broadcast cameras in VR programming. LED light, which is reflected by the ‘stars’, is detected by the StarTracker’s navigation camera mounted on pedestals or cranes. Once the ‘zero’ position and other criteria have been established, these navigation cameras transmit the location data to the graphics engine producing the virtual environment. Initial set-up can be achieved in three hours, after which no further calibration is needed in that studio.

“The absolute optical tracking mechanism removes the ‘drift’ problems often associated with mechanical methods,” explains Michael Geissler, the chief executive officer of Mo-Sys Engineering. “This ‘drift’ often results in graphics that didn’t keep step with the presenter or whatever else was going on in the studio. StarTracker overcomes completely that problem and, in fact, its absolute precision means that even 360 degree pans present no problem to directors who wish to utilise the full potential of the system. Our ‘stars’ – even though placed above studio lights – are resilient to those lights.”

“I see in the StarTracker a significant increase in production value and reliability,” says Michael Ermair, senior manager, graphics, at Plazamedia. “The time-consuming homing procedure of mechanical tracking systems is replaced by the maintenance-free optical marker recognition based system and drift is now no longer an issue. For all of us involved in virtual production the upgrade with StarTracker is making it easier and more fun to work with virtual production. Tracking is how it should be… an automatic process in background.”