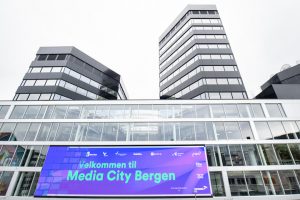 SVG Europe is delighted to announce that it will host its first-ever Nordic Summit in Norway on January 15-16 2018. The summit is a collaboration with NCE Media and will take place at the recently opened Media City Bergen (MCB) complex in Norway. It is open to qualified end users as well as Platinum SVG Europe sponsors.

Although it has only been operational for a few months, MCB has already made its mark as a leading international media cluster with Vizrt, Vizrt, Vimond, Mediability, Sixty, Highsoft, TV 2, NRK, Bergens Tidende, BA and the University of Bergen (Dept. of Information Science and Media Studies) among the key players.

The SVG Europe Nordic Summit will include an extensive tour of the Media City Bergen site as well as a half-day seminar programme including sessions on the development of the site, the present and future of broadcast sports graphics, the possibilities heralded by remote production, and a keynote conversation with Eirik Solheim, Strategic Advisor of Norwegian broadcaster NRK.

The full programme can be found here https://www.svgeurope.org/nordic-summit-2018/, with additional speaker details to be added as they are confirmed.

Attendance to this summit will be limited to invited end users based in the Nordics, SVG Europe Platinum sponsors, and companies based in Media City Bergen.

“It has long been an aspiration of the SVG Europe team to undertake a dedicated Nordic Summit, and it is impossible to think of a more suitable venue for our first major event in the region than the Media City Bergen complex,” says SVG Europe Editor David Davies. “Not only will delegates have the opportunity to tour this exciting new facility, there will also be plentiful insights into the current Nordic sports broadcasting landscape as well as a number of the new techniques and technologies shaping the workflows of tomorrow.”

Anne Jacobsen, CEO of NCE Media, adds: “NCE Media and all the companies in Media City Bergen are excited to work with SVG Europe to arrange the first-ever Nordic Summit. The Nordic media market spans over 27 million people, and many of the world’s leading technology manufacturers, publishers and broadcasters are headquartered here. Media City Bergen is a natural focal point for the industry, and working with the Sports Video Group increases both our reach and our exposure as we welcome attendees and distinguished presenters from around the world in January.”