SVG Football Production Summit: broadcasters get to grips with 4K and more 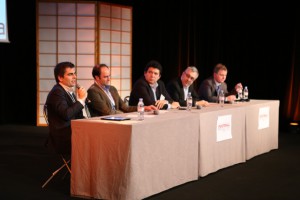 No one disputes the sheer number or variety of new tools available to broadcasters for enhancing their football coverage – but how to make the most effective use of these technologies? The changing face of football broadcasting came under close scrutiny during an illuminating panel session moderated by IEC in Sport COO Peter Angell at SVG Europe’s Football Production Summit in Paris.

Not surprisingly, 4K dominated much of the conversation. Martin Knight, BSkyB Sport, technical producer, said that the spectre of 4K as a tool conjured a sense of déjà vu reminiscent of the SD-HD transition. “From our point of view it’s a technology we want to look at, and there are some tests that we would like to do,” he said. But with the need to deliver all manner of high quality editorial content to go alongside it, “you need to make sure the technology is there to do that otherwise the product will become less of a product”.

Alessandro Reitano, Sky Deutschland, director sports production, echoed Knight in confirming Sky Deutschland’s intention to explore the potential of 4K. But it had to be done slowly and methodically, and with an awareness that the cost involvement should “not be too high”.

Riccardo Botta, Sky Italia, head of sport production and operations, said that the broadcaster had “starting testing” and was considering how to use 4K “as a part of an HD production… There’s a feeling that it’s going to happen; we have to be ready.”

Conversation turned to second screen applications, with François-Charles Bideaux, Canal+, director of sports production, highlighting requests to implement its statistics service on multiple platforms. It had, he said, become “a big service and [one that is] now building for all our sports”. Addressing second screen and mobility is imperative and “where we put our investment because this is requested by the user”.