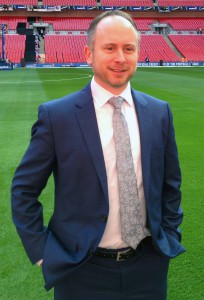 ITN Productions’ managing director claims it is “a disruptive player looking to freshen up the sector through workflow and innovation” as it arrives in the big league of sports production. The creative arm of the UK’s well-established news content provider has ambitious plans to grow in the sports production market having landed its first major broadcast contract. From next season until 2018 it will produce 1,813 games from the Sky Bet Football League Championship, League One and League Two plus Capital One Cup and Johnstone’s Paint Trophy rounds in a multi-million pound contract wrested from IMG.

“What’s interesting is where ITN Productions can add significant value to what is already in this space,” said Mark Browning, MD, ITN Productions. “We think it is underserved by existing players and we know our skillset and approach can open up more of the assets for rights holders.”

He explained: “If you strip back what ITN is famous for it flows from getting access to stories in a live or near live fashion, often connecting up that story from different parts of the world, telling the story and delivering it on. That is the core of what we do and core to our news output for 60 years.”

ITN’s team is a staple of the broadcast of the UK’s largest national events such as the Royal Wedding – a pitch it made to the sports industry. “This is a company that can pull off multi-camera OBs and send them around the world — events which require enormous scale, reliability and trust as well as storytelling skill,” said Browning. “When you consider those core skills you can see why sport is an obvious next step. It’s a very simple strategy and it’s what I set about doing for ITN three years ago.”

Browning was promoted to MD in 2010 from commercial director at multimedia division ITN ON. He says the plan was always to enter the sports market through digital and then move into broadcast. Its first win was for video agency Sports News Television (SNTV), a joint venture between AP and IMG, which white-labelled its digital business to the company. “It won us a foothold in sport and established our credentials,” said Browning.

In 2013 ITN began packaging clips of EPL matches (in-game, at half-time and full-time) for the mobile and online platforms of News International titles The Sun, The Times and The Sunday Times. The deal runs until 2015-16 and has expanded to cover the Scottish SPL, Aviva Premiership Rugby, England home football and cricket internationals, the FA Cup and the Tour de France.

Earlier this month the company, which is 40 per cent owned by ITV, announced its breakthrough move into broadcast. Browning had spent a couple of years researching the sport sector and concluded that the “sheer size and scale of the opportunity” was ripe for ITN to strike.

“Sport typically happens when news is quieter – on an evening or a weekend,” he observed. “That means an awful lot of sunk cost; of technical resources and people underutilised but to some extent already paid for. If you can utilise that resource and find a reason to use that kit then you are able to offer competitive prices against established players who are just adding more overhead and cost because they are already busy at those times.”

He added, “It’s a massive marketplace dominated by a handful of very large players compared to the rest of the TV sector where there are hundreds of independent producers. This is a space that’s not had a lot of change in the last 10 years. Our talks with associations, federations and governing bodies confirmed that they would be incredibly attracted by a new player in the market.

“So when you combine the existing capacity of ITN with a compelling commercial and market opportunity they all lead to us moving into this space.”

Who can you approach?

Browning admitted to finding some raised eyebrows as to why ITN would be interested in bidding for the Football League work when the tender began last September. “It was a positive form of surprise,” he said. “There are still a lot of governing bodies who don’t realise there are more than three to four players they can approach to do this sort of thing. It was perfectly reasonable for them to assume we were something of an unknown, but as soon as we explained our thinking it instantly became clear. We offered brilliant people, fresh ideas and a whole new way of looking at production.”

ITN Productions’ big idea is to digitise the existing linear production process for the Football League. Currently, as Browning tells it, matchday footage from a single camera is captured on tape or card and couriered to the nearest playout centre (usually a BBC regional office). A rough cut version is made available in a linear video exchange funnelled through BT Tower between 18:30 and 20:30 every Saturday and on to IMG.

From next season, ITN will route signals from each match, live, down a fibre network connecting all 72 grounds direct to ITN’s data centre in Slough and simultaneously to ITN HQ in Gray’s Inn Road.

ADI owns and operates the fibre network connecting all 92 English league clubs. It will also provide disaster back up for ITN at its Preston hub.

Match footage, including every single goal from matches in all three divisions will be broadcast in a new 90 minute show aired at 9.00pm every week. Digital clips and highlights content of The Football League’s competitions will also be produced for use by domestic broadcasters (Sky Sports and Channel 5), international broadcasters (through Pitch International) and clubs (through their online Player service run by StreamUK), as well as clips of Premier League matches for top flight clubs that are part of the League’s FLi network of club websites.

“The workflow is realtime so whereas a three o’clock match previously couldn’t begin editing until several hours later, editing can now begin at kick-off,” said Browning.

For Channel 5, the Viacom-backed broadcaster which takes over the free to air rights, it means scheduling a highlights package in primetime rather than nearing midnight under the BBC.

“We’re cutting out the inefficiencies,” said Browning. “What that workflow does is turn content around much faster and gives the Football League and Channel 5 a huge opportunity for a much greater commercial exploitation of the value of their assets.”

Sitting behind your mighty wall

ITN Productions has beefed up its production kit to accommodate the new work. This includes two IP Director systems and databases for logging and clip assembly linked to EVS XS hardware with more than 40 ingest channels. EVS Clean Edit is used for craft editing. It also plans one live OB per week (complementing Sky’s existing live OB of a FL match per week). This will be a classic six-camera operation with an OB supplier yet to be announced.

The production cost of the enterprise will actually rise “but at a manageable, incremental increase” explained Browning. “The upside is greater quality of footage and a greater opportunity to grow the international rights side of the property.”

He hinted that while most FL matches would be single-camera, ITN Productions is looking to scale that to 3-4 cameras in future. This could be by way of virtual angles culled from two or more 4K cameras, although Browning would not be drawn on this.

“There are some more exciting remote production techniques we are looking to rollout,” he said. “You can quite easily scale based on this infrastructure.

“This is a huge shift in terms of the way sports production works and it can be applied across the board to horse racing, the FA Cup, to swimming,” he said. “Many sports bodies perceive production as being cost prohibitive but there is a huge opportunity to open this up for them.”

He argued: “The old world model of sitting behind your mighty wall and saying ‘we are in charge, let us get on with it’ is out of date although still prevalent in this sector. Our approach is to make the process more transparent and to make the client a partner. I think that’s important and for the Football League this collaboration is key.”

ITN Productions’ strategy is clearly working. It also deliberately went for a tier 2 sports property before tackling tier 1 entities like Wimbledon, EPL or an Olympics. Production for one of these could be its next move.

“There will always be a requirement to be on the ground [at a venue] but it’s a question of scale,” remarked Browning of the significance of remote production. “We don’t see a situation where sports broadcast is done by computers, but there are elements of the chain where cost can be taken out, where innovation can lead to better quality and better speed, and that does apply to tier 1 properties as much as to other sports.”

The presentation and studio elements of the Channel 5 programming is to be produced by Sunset+Vine.