SVGE Analysis: Merging virtual with live – the next sports evolution? 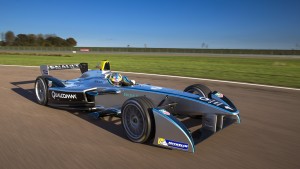 Imagine sports presentation where a virtual world is combined with the actual event and the audience, user, or gamer can switch or play between the two. This is the firm belief of Lawrence Duffy, founder and managing director of Aurora Media Worldwide, the three year old sports media agency behind host coverage of all-electric motorsport FIA Formula E Championship.

“We’ve looked at concepts which would allow us to map a virtual world against the actual world using all the data that we now have access to,” says Duffy. “We can create a virtual world that adds value to the live property. This will be the next natural step for some sports to take. There is a natural coming together between gaming, digital and live sports — between playing and watching – and it will happen soon.”

The most obvious synergies are in e-sports where amateur gamers can already test their mettle against professional gamers and where online gaming is transitioning into a major live streamed event. “Imagine a scenario in a Formula-E race where there’s an amazing overtake manoeuvre and you replay that from every angle and also as a 360-degree virtual replay,” he says.

An example of this cited by Duffy is the Virtual Eye augmented reality presentation which has become core to America’s Cup coverage online. In this system, GPS tracking data sent 1-10 times a second is recreated as graphics detailing the entire race course, including marks, laylines, advantage lines and distances between the boats. All of this information is available in real-time for immediate review and post-race analysis.

“Replication of this in other sports is inevitable,” says Duffy. “Kids can watch a Manchester City game live and then play on their PS4 and recreate the goals they’ve just seen. There’s a thin wall between those two experiences and sports producers will continue to pull down those walls.”

The approach is exemplified in its production of Formula-E for which it is the host broadcaster of the ten race calendar until 2016-17. “Formula E represents the collision between the digital space and TV. It’s about unpacking the OB in order to get further inside the sport than anyone has ever got before.”

He elaborates; “In a world where we can walk down a street and check an instant digital readout on our wrist giving us a record of steps or energy consumed, the viewer wants all data involved in a sport to come to the screen. They want it to be accessible, immediate and as entertaining as possible.”

This philosophy informed Aurora’s choice of camera placement for F-E. There are cameras positioned in the cone of each car and in the rain light at the back for nose to tail action. Layered on top of that is data, a key one being realtime data about the battery life of a car – akin to fuel levels in Formula One (information which FOM keep out of the public eye).

Says Duffy, “Another example from Formula-E is live streamed team to driver radio comms. When you combine live action with data assets and camera positions right inside the sport, it gives the fan a much more entertaining and informative experience.”

Formula-E also famously introduced the fan boost, a means by which fans can affect the outcome of a race by virtually injecting additional power into a race car through interaction on social media. “The industry has talked for a decade about convergence of digital and social platforms with TV and now the opportunities for second and third screen interaction are very real,” says Duffy.

The motorsport is also working with developer 360 Racing to stream 360-degree cameras on board four cars during races. YouTube videos from races have been posted since last May but new tests ongoing since November are intended to give viewers a second screen experience live from a driver’s point of view.

“The 360 cameras we tested are a runaway success and the feedback phenomenal,” reports Duffy. “It speaks to the signature of Formula E which is to be an online and fan-based experience, to be on platforms that allow people to take part. VR and 360-degree video is an ideal way to unpack areas of the track that have not been seen before. We will continue to look at it (live 360) and look to roll it out as an ongoing proposition.”

He admits that innovation of this sort is easier in a sport fresh to market such as Formula-E, which as part of its branding, wants to be seen as a young, rule breaking and tech-savvy. “it is inevitable when you start from a new position that you can be bold,” he says. “That said, your boldness is based on an end-game which, for Formula-E, is to engage, motivate and monetise a sports audience with a new entertainment property.”

A new area for sports production

Duffy, a former IMG and Endemol executive, co-founded Aurora in 2012 and now employs around 30 staff including former Channel 4 live sports editor Jamie Aitchison who is the firm’s commercial & development director. Aurora is one of a number of sports producers – Whisper Films, Whistle Sports and ITN Productions among others – trying to break the duopoly of sports production in the UK.

“If there is a duopoly it’s been hard won,” says Duffy. “People say the contracts are locked up between IMG and Sunset+Vine but they’ve worked hard to get them so there’s no antipathy there. At the same time there’s a third way and it’s the reason I set up this business.”

Traditional sports production companies work with sports rights holders who retain the rights, he says. “Then there are sports [like MLB] which keep control of rights and produce their own media. There is a third way and this is the area in which we sit. This is between working with somebody’s IP and bringing your own IP to the table.

“It’s a new area for sports production and the reason why people come to us to develop original IP. We will be bold in developing solutions that bring digital virtual and live factual to those sports which want it.”

Aurora’s other contracts include for Dubai Duty Free Tennis, part of the ATP tour. It has just signed to work with Dubai-based Falcon and Associates on its social and digital properties including Badminton’s World Superseries Finals. It produces Goodwood Festival of Speed Revival for ITV and elite track cycling 6 Day Cycling held at the Lee Valley Velo Park.