One game was shot by veteran camera operators using smartphones

The NBA MGM Resorts Summer League in Las Vegas always gives the team at NBA Entertainment an opportunity to try out new things. This year, those efforts included extended experiments with robo cameras in the stands 15 rows up from the free-throw line, use of a Spydercam for all five days of coverage, and virtual floor graphics.

But the most noteworthy test was the use of two AT&T 5G cellular nodes as the backbone for a game production that was shot completely with Samsung Galaxy s10 5G smartphones. The NBA relied on veteran camera operators to shoot a Summer League game using nothing but Samsung smartphones.

“We wanted to make maximum use of the bandwidth, so we had only four cameras on the 5G, and then the announce table talent and the roving talent were on Wi-Fi,” said Steve Hellmuth, EVP, media operations and technology, NBA Entertainment. “We had about 12 Mbps per phone, so that was plenty of bandwidth, and we also had three backup cameras for each of the main cameras as we wanted to make sure had solid battery life throughout the entire telecast.”

The idea for the production originated in a discussion about how to integrate content captured via cellphones into a more traditional broadcast that also made use of regular broadcast cameras. But Jill Reardon, global VP, business industry solutions (East), AT&T, suggested producing the entire game with just smartphones.

“That started a big journey about how to get great-looking pictures and also be able to deliver those signals in HD-SDI to the production team in the truck,” said Hellmuth. “This is a device that is used by everyone to talk to friends and share pictures and video. How could we [take] a tool for everyday life and apply it to basketball?”

The broadcast featured interactions with fans in attendance, interviews, views from courtside, a customised graphics package, and other in-arena elements. Noah Eagle, Allie Clifton, and Alexis Morgan led the way as talent, and the game was carried on the ESPN App, International NBA League Pass, and NBA TV Canada.

The eventual signal workflow began with the smartphones’ delivering a 5G signal to AT&T 5G nodes and Ericsson antennas (one antenna was used for each half of the court). From there, the signal was sent to an Ericsson server and offloaded to LiveU systems, which converted the cellular signals to HD-SDI so that they could be delivered to the EVS replay systems and production switcher in Mobile TV Group’s 28HDX truck. 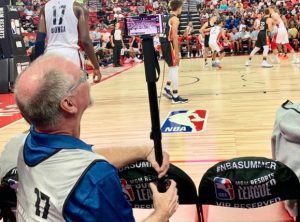 Placement of the Samsung phones was key because there was no ability to zoom. One camera was located under each basket, and there was a camera at the baseline on one side of the court and at the foul line on the other. The game was also shot horizontally.

“One of the cameramen under the basket actually made a rig,” said Hellmuth. The other camera operators had the camera mounted on a pole to provide more stability, and a LiveU app on the phone was used to set white balance and even provide talk-back with the team in the truck.

It might seam that a production without traditional broadcast cameras means that top-level professionals are not required. But that was definitely not the case. Director Jeff Curtain works for the Portland Trailblazers; producer Kyle Hall works for MLSE (Maple Lead Sports and Entertainment). John McConnell created graphics that reflected a new sensibility (for example, a scorebox shaped like a cellphone and a 24-second clock that looked like a cellphone battery-drain indicator), and Skyline New Media’s Jeff Jacobs served as project coordinator. Oh, and yes, professional camera operators were a key part of the effort.

“You need professional operators because they can anticipate the action and they understand the flow of the game,” said Hellmuth. “All four are veteran cameramen who embraced the task and enjoyed getting out from under the hood. They couldn’t have been more enthusiastic, and they embraced it from beginning to end.”

Don’t look for 5G to be at the centre of a regular-season NBA game production any time soon, but Hellmuth does see a great application for non-professional venues or back-of-house or even sideline needs.

“I could see doing a Division III college game with four phones,” he said. “This could also be a great way to have reporters in the stands. Younger talent doesn’t want to be behind a desk; they want to be in the stands with the fans.”

“LiveU also did a great job,” he added. “Solutions engineer Greg Kulaga managed the cameras from a LiveU dashboard and made sure images matched.”