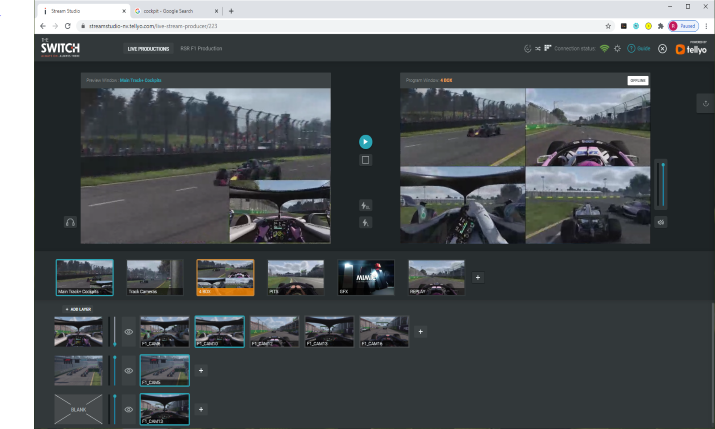 Tellyo has announced that The Switch has selected its Stream Studio and the Tellyo Pro as core elements of a new cloud-based TV production-as-a-service offering, MIMiC, which went live this month.

As part of the agreement, Tellyo is providing a suite of cloud production technologies, based around its Stream Studio and Tellyo Pro platforms, to The Switch.

MIMiC enables content producers to use The Switch’s combination of agile cloud production capability and global network reach to meet the increasing demand for efficient and flexible broadcast quality production and for social media engagement for any live event.

The Switch is a production and delivery platform for live video.

Robert Szabo-Rowe, SVP product management at The Switch, said: “We chose Tellyo because of the proven flexibility and ‘broadcast grade’ capabilities of the system and because it is an expert technical partner we believe in. The development teams have worked closely to combine experiences and knowledge and delivered a groundbreaking solution that enables our TV and enterprise customers to capitalize on new revenue opportunities and reach audiences across more platforms.”

Tellyo Stream Studio has advantages as a cloud-based production platform. It supports up to 24 live streams that can be designed within eight scenes (as mixed effect units) enabling composition of multi-layered video, audio, live graphics, and more, all fully customisable for resizing, cropping, repositioning and transforming.

Richard Collins, CEO at Tellyo, added: “I am pleased that Tellyo has been selected to partner with the production giant, The Switch. The Switch sits in the top tier of professional production, providing services to a vast array of clients: such as the NBA, NHL, NFL and MLB in sport, or broadcasters like the BBC, CBS, Fox, NBC and Sky. Unsurprisingly, given this client roster, The Switch had an extensive list of technical requirements and expectations, which the Tellyo platform and development capability was found to meet or exceed. It is a rare pleasure to work with such like-minded individuals, who share the same vision for both the opportunities that exist today and those that will define the cloud production of the future.”

For the MIMiC implementation, Tellyo has developed what it describes as a number of significant new features for Stream Studio:

A Multiviewer functionality that allows users to see multiple sources, such as live streams, scenes, web sources in a mosaic on single or multiple screens, including the preview and program windows. Users can fully configure which sources or scenes they want to see at all times. The functionality is great for a director or an operator to have remote and parallel access to the production assets and make decisions in real time, being in control at all times and monitor the signals.

A Replay feature that allows the creation of live instant replays from up to four live sources and feed them back to the live production. This feature can work in a single person operation as well as controlled by a dedicated replays operator. As a cloud solution, Stream Studio ensures collaboration and makes it possible for replays operators to be anywhere in the world.

A Source Routing feature that allows reconfiguring the sources of a production quickly. This routing feature speeds operations up, especially when you want to be able to repurpose pre-existing layouts for different productions. Instead of changing the elements of a production one by one, almost building everything from scratch, this new functionality automatically replaces the sources, applying its inherited parameters, such as size, cameras, etc.

Also, Tellyo has continued to add features to support multiuser workflows. These will be available both in MIMiC and Stream Studio for all clients worldwide.