Over the last 18 months, Timeline Television has increasingly been moving towards more remote production, particularly with SailGP, which opens its second season with racing in Sydney at the end of February. To enable this, Timeline has just opened a new gallery at its base in London, as part of a wider expansion.

The upgraded facilities at Ealing Studios, in west London, will make it easier to offer remote productions both at the OB end and the studio end, and Timeline’s MD, Daniel McDonnell is now seeing “a big drive to reduce the number of people you need at an OB, and the amount of equipment you need at an OB, to reduce costs and, more importantly, reduce the impact on the environment.” 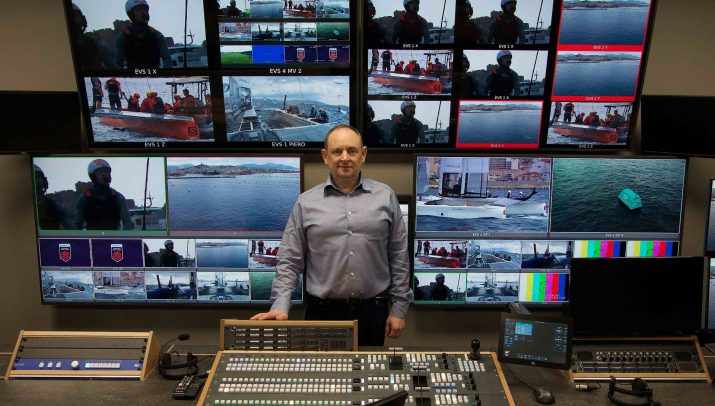 On UK-based productions it means they can use smaller trucks, have fewer people on site and reduce numbers travelling. “But, there is a bigger impact on shows abroad, if we can reduce the amount of equipment that we are sending on boats or planes, and the number of people flying out. That’s been a big driver,” he said.

In 2019, it did SailGP’s first season as a remote production. “The whole host broadcast is directed from Ealing. So, everybody who would normally be on site — the director, the EVS ops, the graphics ops — are all based in Ealing and there is a very small team on site, just collecting the shots,” he explained.

“We also do that week in, week out for football matches, where the only people on site are the camera operators and a small core team of engineers.” All the production staff, graphics, EVS and sound are based at Ealing. It allows the BBC to cover every match in the FA Women’s Super League as single camera or multi-camera games, all of which are presented live on the FA’s web site. “It allows us to do comprehensive production at a very competitive price, while also reducing the number of trucks and people traveling around the country.”

Most weeks it covers two of the seven matches as multi-camera productions, each directed from a gallery in Ealing, while the single-camera matches have commentators, sound mixing and graphics added at the studios.

It’s all about connectivity

Other events Timeline has done as remote productions include half-marathons, using a combination of 4G or radio camera links and satellite or fibre, to get all feeds from about 12 cameras (on motorbikes, hoists and in fixed positions) back to Ealing, with no need for an OB truck on site.

“It is very good for those sorts of road events (marathons or cycle races), where you have lots of cameras spread out over a long distance. Traditionally you would have linked all those back to an OB truck at the start or finish, but there is no need to do that anymore,” said McDonnell.

“4G is shared with the public, so we can send a camera anywhere and it will work fantastically well, but add in 10,000 people and it won’t work very well. You’ve got to be careful where you use 4G.”

A football final, with lots of people trying to stream video on their phones would be impossible, but a motorbike camera following runners through a city will probably work, because the number of people per cell will be low enough. However, with 5G, the promised ability for broadcasters to book bandwidth should change everything, and it won’t matter how many people are trying to stream video at the same time.

“4G is shared with the public, so we can send a camera anywhere and it will work fantastically well, but add in 10,000 people and it won’t work very well. You’ve got to be careful where you use 4G”

“But it is incredibly powerful technology now, 4G, and we do live TV with it all the time,” he said. Timeline has invested heavily in Mobile Viewpoint H.265 equipment, with multiple backpacks and camera kits, which he says are “very high quality and very reliable.”

It means they can send multiple backpacks to a match and require no cabling or other infrastructure. They just book the number of camera operators needed and all the feeds come back to Ealing. “We can run off batteries if we need to, so it is a very lightweight OB with very few people on site.” All the cameras are locked to a timecode transmitter, and if there is an disparity in a feed it can be easily adjusted back at the studio.

SailGP demonstrated that Timeline could produce a large-scale event from London, even when the location was halfway around the world, as with racing in Sydney Harbour. “There is always going to be latency when you are doing a remote OB, because you’ve got the speed of light to the OB – and we were 20,000km away,” he said.

The unknown when they started was “how much latency can people cope with? It turns out that if people know about the latency then it can be dealt with,” and staff very quickly forget that they are so far away from the OB. This year they are experimenting with removing further functions from site, such as racking and camera control for the on-board cameras on each yacht.

He predicts that “over the next 12 to 18 months remote production is going to pick up speed as more people look to bring things back to central locations.” It may not always save money, although it shouldn’t cost more, but “from an environmental point of view, even if it is cost neutral, it is a positive thing to do.”

As an OB company, moving to remote production may change what it invests in next, but “we still need a lot of the equipment, because we still capture the signals, we still need the cameras, we still need engineers on site to make sure all of that happens.” The engineering role may change, because it emphasises connectivity and people who understand that.

There is still a need for a lot of equipment on site, so OB trucks will only change slowly. “It’s going to be a long time before every OB is suited to remote production.” SailGP was perfect because it was designed from the start to be a remote production, but one offs may not offer the same easy gains. “OBs are very bespoke, so all sorts of OBs exist and it’s a case of finding the best model for each client,” he said.

H.265 allows them deliver higher quality over reduced bandwidth, and reducing its encoding time is the next big hurdle. “What we really need is very high quality, very low latency encoding, which is slowly coming.”

Normally, the lower the latency the higher the bitrate, so there are difficult trade offs to overcome. Fortunately, the price of connectivity is coming down, and bandwidth is more widely available, so 10Gb and even 100Gb connections are becoming possible. Timeline is using dual-redundant fibre circuits for SailGP to the OBs, from Tata Communications, which “proved very reliable last year.”

The technology to do remote productions has “delivered what we wanted it to,” said McDonnell, and it is now more a matter of everyone learning how to work with half the team in a different time zone. “We put in cameras so we could see each other, because you can feel quite disconnected, and just a simple thing of being able to see each other when you have meetings makes it a little bit easier to work as a team.

“It’s more those issues around this new way of working that is interesting,” he said. It requires a mindset change, but this has been positive, because many people got to work on a big event that they might not have been able to if they had to go to Australia or America, due to family commitments, for example.

“It opens up the talent pool, but it also means that people have got to learn to work in a remote way and have more separation between the event and the operation. That’s been an exciting challenge.”

Now that Timeline has opened its fourth large gallery at Ealing, “we can do four completely different shows at the same time or, as on SailGP, have multiple galleries working towards the same show,” said McDonnell.

“With remote production, you need to replicate everything that you would have at an OB,” such as multiple EVS and graphics systems, and need to be able to test Tally lights and engineering signals. “You are the OB, so you have to do everything, added to the fact that you’re not there. So, it’s quite a complex operation to have a remote production set up, so this is a pretty extensive broadcast centre now.”

When Timeline does the Women’s Super League, with seven matches coming in, the single-camera games are dealt with in the quality control area, where it has sound operators who can mix the sound and multiple commentary booths, with producers watching the feeds and talking to the camera operators. It also has three small galleries, which can handle smaller events, “but to do seven multi-camera games would be quite a large operation.”

It also now has 15 edit suites at Ealing, up from ten, as it needs lots of edit suites making all the different highlights and features for SailGP.

“We’re currently working on a new 4K HDR OB truck, which we’ll be launching this summer”

The company has been expanding at its other sites too and now has some 170 staff, about 65-70 of whom work at BT Sport’s studios in Stratford, east London, which Timeline manages. It does remote production on football for BT, and also handles an increasing number of third-party production companies using the BT studios.

It also has multiple OB trucks, from small links vehicles up to UHD2, its IP-based truck. “We’re currently working on a new 4K HDR OB truck, which we’ll be launching this summer.” It will use the same Grass Valley IP technology as UHD2, and have similar scale and capabilities, as there is still a lot of demand for large-scale OBs.

It also offers clients cloud-based media asset management, running a Tedial MAM, including archive management and migration, which is another growth market and can be offered as part of a remote production package.