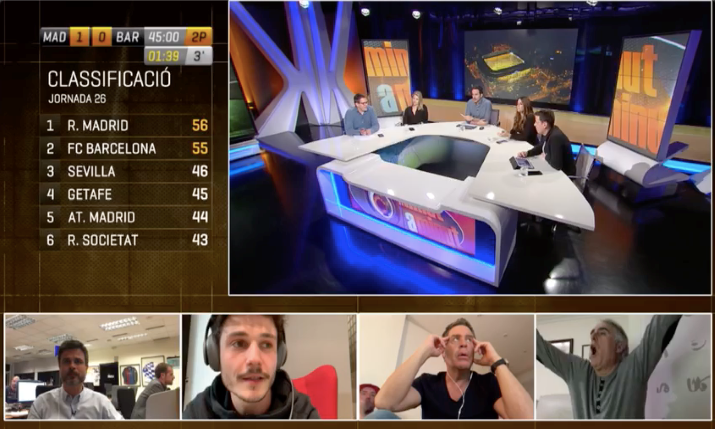 Making use of the mobile transmitter app TVU Anywhere, TV3 was able to simultaneously host 29 football fans globally in a virtual talk show during the two hour live broadcast on its Esport3 channel on 1 March.

The programme’s panellists were able to engage in live video exchanges with fans in full HD picture quality and with minimal delay.

“The TVU Anywhere transmissions ran flawlessly throughout the broadcast, which was especially important when switching between the numerous live fans,” reported Daniel Barcon, director of ESport3 at TV3.

“We had full control to activate, deactivate and set the time period of validity for the multiple accounts, which was very reassuring. The ease of the technical set up, as well as the functionality of the TVU Anywhere app for participants, allowed people from a variety of different backgrounds to connect with each other over their passion for football,” he added.

This connection was made possible with TVU Anywhere’s intuitive token-based user management. Fans were provided with a QR code to pair their mobile device to a remote TVU Server.

TVU Anywhere is a smartphone app that aggregates cellular data, with H.265 encoding and patented IS+ transmission algorithm. It allows anyone to transmit high-quality live video footage to broadcasters and TV studios, securing high and reliable bandwidth by aggregating both cellular and home internet connection.

“We are honoured to have TV3 place their trust in using the TVU Anywhere app to bring the fan experience to a whole new level with this global football event,” said Paul Shen, CEO, TVU Networks. “During this critical time, it is rewarding to see TVU’s innovations playing an important role in helping our global media partners continue to create and deliver programs to their audiences.”

TVU Networks is offering TVU Anywhere, as well as other turnkey solutions free of charge to media organisations and government agencies until 31 April.

You can watch a re-run of the show below.