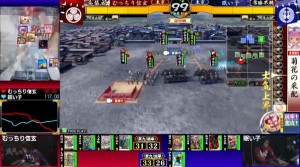 Played over a six-hour period, the SEGA tournament brought together 32 winners from previously held regional rounds. The event used a live feed from a Viz Engine, Vizrt’s real-time graphics and video compositing system, to follow four game machines and show players’ moves and stats in real-time on a large screen in the exhibition hall. Viz Engine was also connected to a game server in order to retrieve and display interactive statistical data and 3D graphics. In addition, a plug-in was developed to display a live heartbeat of each player as well as their card position on the game board.

“The capability to easily visualize large amounts of data and graphics files makes Viz Engine ideal for the growing e-sports market,” said Petter Ole Jakobsen, Vizrt CTO. “Viz Engine’s versatility allows it to be used in nearly any resolution for any kind of live production. SEGA used this capability to produce a very unique presentation that immerse the players further into the game.”

The theme of the first installment of Sengoku Taisen is 1560: Battle of Okehazama. Players collect (and trade) special character cards and use them to play the game. The game’s board and screen are linked so when players move cards on the interactive touch-sensitive board, virtual armies move to reflect their new positions.