This year, for the first time ever, Italy and Bulgaria jointly hosted the FIVB Volleyball Men’s World Championship from 9-30 September. Matches were held in Florence, Milan, Rome, Bari, and Bologna, Bulgarian cities Ruse, Sofia and Varna, and the finals in Turin.

This high profile event was chosen by Turin-based Global Production to debut its new 4K UHD OB8 truck, which covered the opening match in Rome, before travelling up to Florence for Round 1 Pool A (11 matches), then on to Assago (Milan) for Round 2 Pool E. 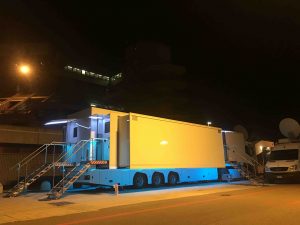 The new truck is claimed to be a first in terms of the number of true 4K Ultra HD cameras it supports and its overall production capability. Although there are currently a number of other Ultra HD trucks on the road today in Europe, most rely on up-conversion of some cameras to obtain the number of viewpoints that fans expect for fast-moving sports such as volleyball.

Nicola Dall’Asta, CEO and founder of system integrator Chromaline Srl, continues, “Our brief was to design a truck able to ensure the utmost flexibility in terms of use, space and technology, fundamental requisites for its intended target of large-scale international events.”

Global Production’s intent was to launch a new concept in OB production. The interior, based on the analysis and design of every single cabinet, features an air-conditioning system with oxygen recirculation to improve the performance and the comfort for the production team’s work environment, and the truck’s lighting follows the colour temperature of the natural outdoor light to avoid upsetting technicians’ natural biorhythms.

Ready for use with up to 30 true UHD cameras, the truck is relatively compact, considering the amount of technology on board, thanks to a careful selection of hardware at the drawing board stage. This included a leading edge router (Imagine Communications Platinum IP3) that features mixed-format video and audio routing, multiviewer functionality, mux/demux, frame sync and colour correction, as well as other advanced I/O options such as MADI and fibre carrying thousands of I/O signals (audio, video, MADI and IP).

Global asked Dall’Asta “to bring their dream project to life without coming to any compromises.” Dall’Asta continues, “All routing, glue and processing infrastructure is by Imagine Communications, and a key role at technical level is played by the four Selenio Network Processors (SNP), very powerful compact machines which are real IP baseband gateways enabling extremely simple format conversion from 4K to HD-SDI, HDR to SDR, 12G to 2SI, 3G or 4KFQ. They’re ideal for fast-paced OB production projects, as their processing blocks can be quickly configured and reprogrammed on the fly.”

Inside the truck: technology overview

Global Production co-owner Davide Furlan continues, “OB8 is based on our considerable experience in large UHD and HD productions. We wanted to create a unique work tool with no compromises in technical aspects and work comfort, addressing large producers and the foreign market. T     he impeccable care taken with every technical and ergonomic detail makes working on this unit a unique wonderfully comfortable experience.” 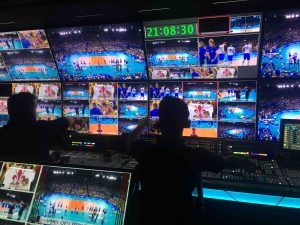 In the central production area, the main gallery desk can accommodate nine operators

In the central (7.20 x 5.60 m) production area, the main gallery desk can accommodate nine operators, and on the opposite side the UHD HDR/main vision and slo-mo desk and in the centre a production desk able to comfortably seat five. The two GVG video switchers are a K-Frame + Kayenne 3.5 M/E (main) and a K-Frame + Karrera 2M/E. Slo-mo facilities (72 ch. IN and 36 ch. OUT HD 3G) are courtesy of four EVS XT-VIA and an XT3 ChannelMax.

At the opposite end of the trailer from the master control room, the sound suite hosts two DiGiCo digital mixing consoles, a main SD7B Q7 76-fader desk, developed specifically for broadcast applications, and an SD 12 24-fader SD12. The main desk has a pair of Genelec 8331 speakers for stereo monitoring, and 8330 speakers and a 7350A subwoofer for 5.1.

A central four-person second gallery desk is located between the two audio areas and alongside it is the suite crewed by the VTR ops, who have up to five AJA Ki Pro Quad 4K UHD recorders and up to five XDCAM HD at their disposal. 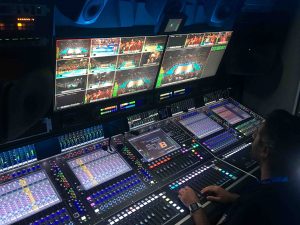 solution utilising Audinate’s Dante technology, with no less than fifty KP series key panels, forty on board and ten reserved for external use.

The truck can field up to 30 GVG LEDX 86N cameras and, for its debut project, Gilberto Steccazzini explained, “We deployed ten cameras, of which seven worked at normal rate, two at 3x and one at 6x.”

After the Volleyball Championships Furlan continued, “Our client appreciated the fact that were able to rapidly satisfy any request, even if made right before going on air, which was possible thanks to the great router, the ability to be connected directly via fibre to the external devices and handling quantities of incoming and outgoing video and audio signals with a simplicity would have been really inconceivable up until relatively recently.

“This resulted in an external cable set-up that is really very small in terms of quantity of cable. Just looking at the truck’s rear termination area it is clear to see that complex set-ups with a remarkable number of cameras and services can be deployed with just a few fibre cables.”

The volleyball games required just three 24-core single-mode fibre cables so, as well as saving precious time, definitely had a low on-site impact (much appreciated by venue managers) and a reduction of “points of failure” due to the smaller number of cables subject to damage and faults.

Furlan concluded, “Ferrari will produce the Challenge World Finals in Monza in UHD HDR in November using our OB8 with 24 cameras, and Infront have also said they want to use it for Alpine and Nordic ski contest coverage in UHD HDR – plus, there’s obviously Italian and foreign soccer, with the Champions and Europa Leagues.

“We can safely say that OB8 is currently Italy’s most powerful and most comfortable production van and one of Europe’s top five — and this great challenge was also won thanks to the production team, who put all their experience and passion into ensuring a result that was exciting to say the least.”