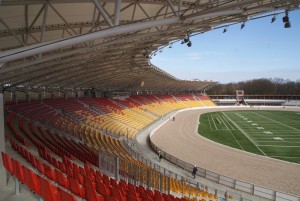 The Olympic Stadium in Wroclaw, Poland, has been sympathetically refurbished and modernised through a redevelopment plan that included substantial new construction. The opportunity for the project came as a result of Wroclaw being awarded host city for the 2017 World Games.

Built in 1928, the listed-monument stadium was one of the many great sports complexes constructed across Germany in the 1920s, its location becoming a part of Poland after World War 2. Restored areas include the brick exterior of the original building, along with the old clock tower opposite the main grandstand. The largest transformation has been the building of a new main grandstand with covered seating. Additionally, the venue has improved hospitality areas and significantly better access for disabled sports fans.

The redesign of the 11,000 capacity stadium, which will host speedway racing, American football and rugby, is the work of Poznan-based architect Wojciecha Ryżyńskiego. The sound system for the Olympic Stadium was designed and installed by Tommex Żebrowscy Sp. J. and is based around Community R SERIES loudspeakers and Dynacord electronics.

The main system is housed in the commentary room and linked to two separate amplifier rooms. The audio signal is transmitted over the stadium’s network using the Dante protocol and is triple redundant, with two fiber rings and a turbo function ring.

The system uses a Dynacord CMS 2200-3 audio mixer, 16 x 16 DSP equipped digital control matrix and a DPM 8016 digital matrix manager. The audio matrix is 32 × 32 and handled by Dynacord’s P 64 digital audio matrix units. By using the IRIS-Net network, each element of the system is continuously monitored and all operations are controlled via a Dell all-in-one touchscreen PC.

For the new main grandstand Tommex positioned the loudspeakers on the front edge of the roof canopy, using seventeen 60 x 60 degree R.5-66MAX to cover the lower front seats and sixteen R.5-96MAX, with 90 x 60 degree dispersion, for the higher rear seating. For the refurbished smaller stands, consistent coverage is provided by fifty-two R.15COAX and twenty R.5-66TZ loudspeakers. Additional field and motorcycle park areas use a combination of R.5HPT and R.35-3896 loudspeakers.

Commenting on the installation, Marcin Zimny, Commercial Director of Tommex, said: “The refurbishment and new build of the Olympic Stadium has retained its historic architectural integrity whilst delivering the facilities and experience of a totally modern venue. The sound system’s high performance and all-weather reliability are designed to meet the standards of the stadium again becoming a world-class venue.”