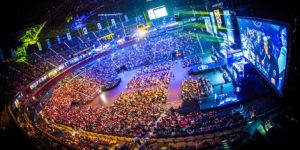 Esports, despite the perception of major media outlets and those in the traditional TV business, can best be described as an overnight success 15 years in the making. Online tournaments like those found at Twitch.com are nothing new, and even major sports-videogame brands, such as Madden, have a deep history of competitions. But, in the past two years, esports has captured the attention of some of the world’s most powerful media and sports brands. It was also the focus of the two-day XLIVE Esports Summit event in New York City last week.

During the event, several esports-related executives shared their visions for everything from franchising of teams, how to make use of social media, and, of course, how to continue to grow the esports market.

Craig Levine, CEO, ESL North America, said his company has forged a different path from that of other esports providers. But the ESL and all esports companies share one common element: a virtual field of play that provides what Levine called an incredible opportunity to scale and meet the needs of both participants and viewers. “It’s all about the games, and we believe in creating an infrastructure that transcends individual game titles.”

That infrastructure has resulted in a pyramid approach to esports growth. At the bottom are the casual gamers, who can be found at ESL Play. ESL Play has 7.3 million registered players who have played in more than 91,000 tournaments and more than 125 million matches.

“It’s the first taste of glory for a gamer,” said Levine.

The next step up is the ESL Premium, a pay service that Levine equates to the private tennis club. It offers a premium experience, better anti-cheating protections, faster server response, and match-making.

“From there,” he said, “the next step is into the national championships, of which we have had two or three per year since 2001.”

And then there is the ESL Pro League, with $2 million in prize money, playoffs held in stadiums that hold 4,000 fans, and 4 million unique viewers tuning in via Twitch and YouTube.

Of course, the newest marketing opportunity for esports is to deliver content via cable distribution to TV sets, giving a sports property that has been comfortable in the online world a chance to reach a new (and older) audience. But it can also deliver a more robust viewing experience.

The biggest push to date has been ELEAGUE on TBS, which made its debut on May 24, 2016, with a Counter-Strike tournament. Its second season has been completed, season three is in the works, and, in April, a Street Fighter V Invitational began.

“We’re happy with what we have accomplished, but you are only as good as your last show,” said Christina Alejandre, VP and GM, ELeague. “We’re happy to have crossed the 1 million mark and get nominations, but we will never rest on our laurels. We’re excited to be part of pushing esports forward.”

Typically, when a non-televised event makes the move to TV, the TV-production community reshapes it and changes it to ensure that it is as TV-friendly as possible. But the esports community is hardcore when it comes to things like authenticity and making sure that overtones of counter-culturalism are part of the experience.

“We wanted to get as many people to watch as possible, but the main goal was authenticity, because we knew we had to capture the core audience and not ‘TV-ify’ it with abnormal commercial breaks,” Alejandre added. “So we breathed a sigh of relief when we were able to stay true to the sport.”

Helping in those authenticity efforts is a tight relationship with the publishers, with an open dialogue to ensure that the games are presented in the best way. Also important is a social-media team that Alejandre said is the best in the esports business.

“They would meme everything, as ELEAGUE viewers would follow it on social media at the time [because] it is a way to talk to their friends and to see players making fun of another player,” she added. “And now that we have established ourselves, we have to be as additive as possible and extend esports to the mainstream.”

College campuses are getting into the esports business, and there are even college scholarships available to top-notch esports players.

Erin Harvego, VP, Big Ten Network, discussed the conference’s efforts around esports. The Penn State esports club reached out to Big Ten Network to see how it could help create a Big Ten esports tournament. Harvego attended Pax East, an annual esports conference. It was there that a pilot BTN Invitational was held, featuring teams from Ohio State and Michigan State. She was sold on the effort by a crowd of upwards of 500 people watching entire matches.

“It’s a different level of attention from the audience,” she pointed out. “Everyone plays the game and is trying to learn how to get better.”

The invitational led to a league that launched in January and featured teams from 12 of 14 schools in the conference competing in a season-long League of Legends championship.The matches were available on the BTN To Go app as well as Twitch and Facebook Live and watch.lolesports.com. One advantage vs. traditional sports? Players won’t have to travel and can play the games from their dorm rooms until the finals, which will take place at Riot Games’ facilities in Los Angeles in March.

“Twitch and Facebook had the best numbers,” said Harvego, “but, on Twitch, there were comments that the app had better quality.”

One challenge is that athletic departments don’t historically have an in-house team well-versed in esports, ready to call the action, or even understand it well enough to fire up an effective social-media offering.

“We had to find people with expertise in esports and lean heavily on them,” she explained. For example, social-media commentary about a traditional sport like football typically involves threads where fans say things like “Go, team, go!” An esports thread will focus more on what is going on and feature reactions to game action.

Those live events, like the online events, also provide a way for esports organisations to gather data points that drive next-generation gaming and content creation. Connect and Go CEO Anthony Polermo heads efforts to make use of RFID wristbands at the live events so that organisers can find out how people spend their time and money and what activation areas are most worthwhile.

“The key is to register them when they purchase a ticket and a unique ID so that you can see what they are doing at home, study their behavior, and know in advance what will be most popular,” Polermo explained. “You want to get to the point where you have predictive information and intelligence.”

Maestro helps them understand the audience on Twitch and YouTube but also has staffers, known as Maestros, who will take key moments from a match and share them, a move that can increase watch time by upwards of 50%.

“The real point is to get data alongside the content metrics so you can understand how to drive KPIs [key performance indicators],” Evans said. “The biggest problem is that people want to grow the audience, which is very different from growing the viewer count. You give the user actions that they can take and care about and then gather information that is useful for your strategy.”

For example, Maestro creates highlights for an esports team and figures out which viewer supports which team based on who shares what highlight.

“It’s a two-way mechanism; you can personalise the experience for the viewer and find out what they are interested in and then augment the content in an engaging way,” he said. “That is the next frontier.”

It’s also about figuring out how to monetise the online audience while they are watching the event. That means creating opportunities for impulse buys of weapon skins, games, and more via contextual overlays. For those viewers who are signed in, sales can take place with the click of a button.

“But it’s surprising how simple the concept sounds and yet how difficult it is to push it through to [marketers],” Evans added. “But we’re making headway.”

One of the issues is that the content-creation teams within the big publishing companies often do not talk to those in the companies who handle merchandising or marketing.

“If you look at spectator behavior alongside their real-world behavior,” Evans pointed out, “there are some simple marketing opportunities if you can connect the data sets together.”