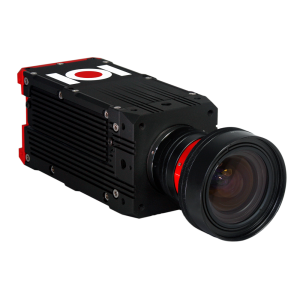 A typical volumetric video capture studio employs an array of machine vision camera heads interfaced with a cluster of external PC’s for recording and storage. After a recording session, data is transferred from the PC cluster into the rendering farm’s centralized storage for processing. This means there is a delay before processing can start in the rendering farm.

Volucam eliminates the delay to processing by allowing direct data transfer to the rendering farm’s storage while recording is in progress. Volucam’s internal high-capacity storage buffers raw video while the camera’s 10GigE fiber optic port simultaneously transfers buffered video to the rendering farm’s storage via a 10GigE switch. A PC cluster is no longer needed for temporary video storage, tremendously simplifying studio configuration. The reduction in hardware and cabling results in a studio that’s easier to configure, operate and support.

IO Industries said Volucam will initially be available with options for 1TB or 2TB of physical internal storage. A lossless compression engine in the camera can be optionally enabled to extend recording times.