Mediaset Spain, owner of the Telecinco broadcast station, has chosen a Clear-Com Eclipse-Median digital matrix and FreeSpeak digital wireless system to support communications at the company’s headquarters in Fuencarral, near Madrid, Spain. The Clear-Com systems were selected to streamline communications during production of regular news programs, as well as reality and staged programming, in all six of Telecinco’s studios. 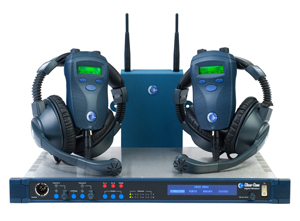 Installed by QinMedia, Clear-Com’s Spanish distributor, the setup includes FreeSpeak wireless intercoms, both as a standalone system and as one integrated within an Eclipse-Median digital intercom matrix. The high capacity Eclipse intercom solution is scalable to accommodate forthcoming developments, making it a valuable long-term investment.

“The modular topology of the Eclipse system enables future growth of the intercom network due to its ability to connect to other communications systems, such as intercom-over-IP, wireless technologies and those with fiber connectivity,” says Jose María Alvarez González, General Manager, QinMedia. “With the unique integration of the FreeSpeak systems to the Eclipse, there is a significant increase in the capabilities available for us to achieve our production goals. The dual-solution provides many channels of both wired and wireless communications, which conveniently allows individuals and groups to communicate on separate paths, with whomever and whenever they need, without the interference found in other conventional systems.”

Telecinco can connect up to 20 full-duplex wireless beltpacks to one base station in standalone mode. Engineers can also access as many as 40 connections to the Eclipse-Median digital matrix when integrated with FreeSpeak, which functions within the license-free 1.8GHz-1.93GHz frequency band, away from the crowded spectrum where other wireless devices operate. The wireless system combines DECT and wireless auto-roaming technologies to ensure reliable signals from anywhere in the station. With these roaming capabilities, the system’s antennas combine to create a single network of widespread coverage so users can move freely throughout each of the stages, control rooms and dressing rooms, without loss of service.

Gonzalez noted that, at any given time, users always have access to easy-to-use, quality communications because FreeSpeak has zero network delay and a 7 kHz audio bandwidth.

“We are very pleased that Mediaset has selected Clear-Com to dramatically enhance internal communications at Telecinco,” says Richard Palmer, Clear-Com Regional Sales Manager, Southern Europe. “The production team at the station relies on FreeSpeak to move freely between studios without interference or loss of service, while the Eclipse provides a comprehensive set of features for every production challenge, with the added benefit of having several options for expansion in the future.”