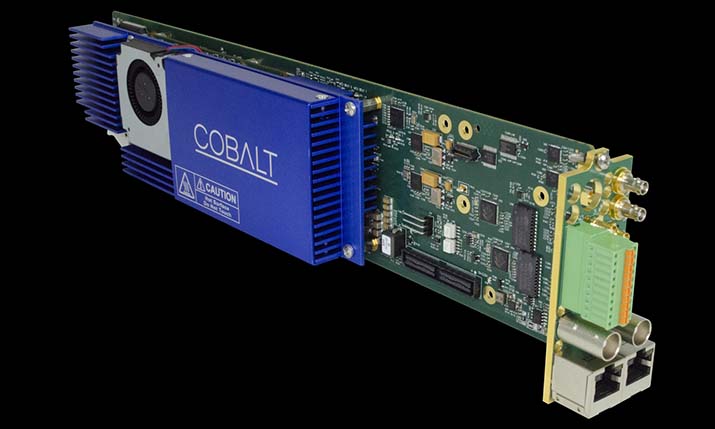 Cobalt is pushing latency to the lowest limits possible with the release of an ultra-low latency mode for its 9992-ENC software-defined broadcast encoder card series.

Described as a breakthrough, it combines parallel processing with Gradual Decoder Refresh (GDR) and a suitable Coded Picture Buffer (CPB) to achieve encoder latencies as low as 10 milliseconds, which the company believes makes it desirable to any broadcaster of live events such as sports or news.

Even before this development, the 9992-ENC series, made for openGear, met the most stringent production requirements by combining traditional broadcast features with advanced network options, Cobalt claims. Cobalt’s HEVC video encoding technology is said to have provided a substantial compression efficiency improvement over previous standards, while also supporting existing MPEG-2 and MPEG-4 AVC.

Ciro Noronha, Cobalt’s vice president of engineering, said: “In any sort of video compression, there is a trade-off between three variables: latency, quality, and bit rate. Essentially, any two of these can be optimised at the expense of the third, and a quality encoder will allow you to adjust the levels and choose the operating point that works for you. The Cobalt 9992-ENC has always had this capability, and where latency is concerned, the most important ones are the CPB delay, and the use of GDR that allowed latency to vary from over a second (for high quality at low bit rate) to about 100 milliseconds. This is available for both AVC and HEVC (and, with some limitations, for MPEG-2 as well).  ow with Ultra-Low Latency Mode, this is reduced to as low as 10 milliseconds, a significantly important innovation for broadcasters.”

Noronha also noted that this latency level is lower than the intrinsic latency of the usual audio encoders, so the 9992-ENC offers LPCM audio support to bypass them.

In a related development, Cobalt is also releasing updated firmware for its 9992-DEC, with tunable latency.  When combined with the 9992-ENC, end-to-end latencies of about 100ms are achievable in HEVC mode, and about 300ms in AVC mode.