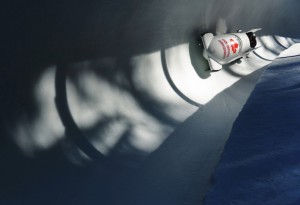 Visions of St. Moritz often appear in the dreams of those in the bobsled, skeleton, and luge world. And for good reason. First there is the beauty. Then there is the glam. And then there is a natural ice track. And for the current two-week period it is the home to the 2013 Bauhaus FIBT Bob & Skeleton World Championships. “We’re in the Yankee Stadium of the sport,” says John Morgan, network coordinator for the Federation Internationale de Bobsleigh and Tobogganing’s FIBT TV, of St. Moritz-Celerina Olympic Bobrun. “It makes you want to kiss the ground as it has spectacular weather and a natural ice track.”

Last year’s event, held in the US at Lake Placid, saw US OB provider Corplex step up for the TV production duties. This year it is ATM Systems, the Polish OB provider that has worked with the Bobsledding Federation since before December. EVS XT3 systems play a big part in the production, especially during replays of the runs which last about 45 seconds and require 31 cameras to quickly be cut to one after the other.

“We’ve never worked with them before and they have been  very good technically and production wise,” says Morgan. “There has been a lot of bobsled 101 teaching that can be pretty difficult but they got through it.”

Every track on the sled circuit is different and the tour over the past six weeks has gone from Germany to France, back to Germany, to Austria, and now to St. Moritz. That means a different number of cameras on each track as well as different placement. In St. Moritz 31 cameras are used as well as a couple of super slo-motion systems.

“Here the coverage is really wide open,” says Morgan of a track that does not require many of the safety precautions that can often get in the way of camera coverage.

A natural track in a forest also offers a cabling challenge similar to a ski run as there are no pre-installed cable runs. Morgan says about 50,000 feet of cable have been laid for St. Moritz.

“It’s quite the circus,” he adds. “But it really is a special, special place.” Mark Verstraete, director for the broadcasts, says there are three high-speed cameras in use, a combination of Thomson and Sony cameras. There are also two small HD cameras embedded into the ice to capture dramatic shots of racers passing overhead with the help of converters from Blackmagic Design.

“There are 31 cameras that are cut to in less than a minute and our main challenge is to give nice coverage of the race but also be able to see the mistakes,” says Verstraete. “But you cannot always look into the curve if it is covered so that is the main problem.”

Sony HD remote controlled cameras are also used. They are fully controllable from a remote location so adjusting color or white balance as weather conditions change is easy.

“All the cameras are in one line and we follow that line and the EVS guys help a lot,” he says. For example most famous turn in St. Moritz is called the Horseshoe and there are five cameras located there. But only one is used in the line cut: the others are on hand for replays.

“Things become fun when there is a crash on the track,” adds Verstraete.

Audio is also a tricky proposal and the audio is paired up with each camera so when the director cuts to a new camera the audio is automatically cut as well.

Up next? An Olympic preview in Sochi and also an opportunity to work in the Panorama HD trucks, the new Russian fleet of OB vans that will play a major part in the 2013 Winter Olympics in February. A small crew of six will make the journey, joined by a freelance camera and engineering crew.

“You need five or six elite guys that can hold the shots of the racers coming at them,” says Morgan of the demands on cameramen shooting sleds speeding past at over 100 kilometers per hour. “And they have to stand shooting in the cold and rain for five hours.”