The Streaming Factory’s online coverage of the 16th RheinEnergie Marathon Cologne, the largest sporting event held in the North Rheine Westphalia region of Germany with more than 25,000 people taking part, made use of LiveU technologies to transmit the event to its official Web site. 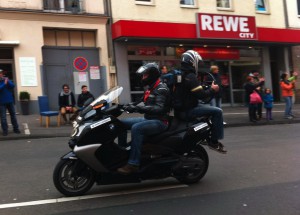 The LiveU LU70 transmitted images to the Cologne Marathon Web site from motorcycles on the route.

“The live coverage of the RheinEnergie Cologne Marathon course was a complete success,” says Markus Frisch, CEO Köln Marathon. “There were great images from the race of the battle for the lead and the winning break shortly before the finish line. Live coverage like this was really valuable; it was widely appreciated, especially by the friends and family of all the participants. Journalists could also follow the exciting race live including the setting of new course records. We will use the excellent LiveU technology again at future events.”

A flagship LiveU LU70 unit, which allows the transport of HD images, allowed Streaming Factory to closely follow the entire race using a motorcycle and cameraman, bringing close up, visually exciting images to viewers while moving alongside the race. In addition, Streaming Factory placed cameras around the finish line and these, along with the cellular signal from the LiveU unit, were vision mixed onsite and then streamed via Livestream’s CDN.

The LU70 uplink solution supports resolutions ranging from CIF (360×240 pixels, standard definition) and up to 1080i high definition. The video is encoded using the high efficiency H.264 AVC high profile and then transmitted to the studio. The LU70 comes with either SDI or HDMI and analog video input interfaces together with DV IEEE 1394 Firewire. The LU1000 software on the studio side supports multiple simultaneous SDI or analogue outputs to a TV switcher, as well as a variety of web encoders.

Zion Eilam, LiveU’s Key Account executive, says, “Having a constant stream from the motorbike really brought the event to life and at a price point that was cost-effective for the organisers. High quality cellular uplinking is a real game-changer for the streaming market, allowing events beyond the traditional sports to gain great coverage. This is another example of how our technology can be used.”

LiveU’s flagship LU70 product is the industry’s leading, bonded 3G/4G LTE backpack with proprietary RF technology for superior resiliency, up to 1080 HD video and sub-second latency for a satellite-like experience. Other features include One-Touch-Live (LiveU OTL) mode with automatic adjustment of video resolutions for fast and easy live video transmission at the touch of a button; point to multi-point distribution, whereby a single device can broadcast to multiple, varied destinations concurrently; increased throughput up to 10Mb/sec for even better video quality and an instant Wi-Fi access point, providing wireless connectivity over Wi-Fi for areas with limited network connections.

The LU70 also includes: Fast File Transfer (FTP) for fast upload of pre-recorded material from anywhere into the workflow; IFB (return audio channel from studio), Store & Forward, and local recording on the transmitting unit or on externally attached storage device.

The LU70 portable uplink system can be easily and fully controlled by a single operator in the field using an intuitive touch-screen interface, and an external touch-screen. Additionally, the unit can be controlled remotely from any computer or using a variety of mobile devices such as iPhone, iTouch, Android, and iPad. The LiveU system also analyzes the data conditions in the field and automatically recommends the most suitable video settings.