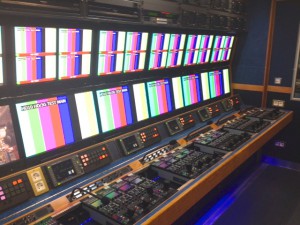 The use of all OLED monitoring makes the new trucks built by Sony for Panorama an industry first.

Next week all eyes will turn to London for the 2012 Olympics. But about an hour outside of town, at an office park in Basingstoke, the team at Sony Solutions Europe will continue to put the finishing touches on a fleet of OB vehicles that will play a key role in defining the future of sport production in Russia, including the 2014 Winter Olympics that will be held in Sochi, Russia.

Built for Russia’s ANO Sports Broadcasting (Panorama), the complete fleet of 24 trailers will be dispersed among the four broadcast organisations that formed Panorama in 2009: OJSC Channel One, FGUP VGTRK, OJSC NTV-PLUS and the RIA Novosti news agency on December 24, 2009.

“You can’t deliver 24 trucks in one year so we first worked on the five OB units that can handle 10-12 cameras and are now working on the three prestigious big trailers,” says Tadeusz Krzeminski, project manager for Sony Solutions Europe.

The OB fleet includes five 10-camera units, four 16-camera units, and three 24-camera units that also include the latest technology. With the exception of the three larger units, all other vehicles are already working throughout Russia.

“They wanted to move to 3G, HD, and make sure they have the means to produce big sports events,” adds Krzeminski.

The project began in earnest in November of 2010 and since then the team at Sony has learned how to raise the bar quite significantly when it comes to getting the right gear, creating the right production environment, and embracing innovative design. 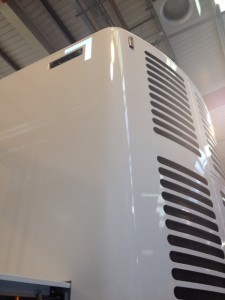 The new trucks built by Sony for Panorama have a rounded, smooth design.

“This was the first big order for that camera, numbering 72 cameras for one project,” says Mark Grinyer, head of 3G and Sports Business Development at Sony.

The OB units are also a first for OLED, being the first to have OLED monitors throughout all of the vehicles.

“Usually you will see OLED monitors in the main production area but these units are OLED throughout,” says Grinyer. “They are really pushing the technology.”

All the trucks also have a 3G infrastructure. “Going 3G gave us good practical experience as it was something that had not happened before, especially in the amount of time and size of the project we needed to deliver,” adds Krzeminsk.

Ian Davis, project manager for Sony Solutions Europe, says that there is a significant amount of fibre on board. One unique design element for the vehicles is that the tail board (or the rear) of the OB unit has all of the camera connectors, from BNC to fibre.

“Bandwidth needs are increasing as these trucks are not just feeding video and audio,” explains Davis. “So we thought a little bit down the line and built a bigger fibre infrastructure that can send power [as well as audio and video].”

Other gear on board the trucks includes EVS XT3 servers, Snell Kahuna vision mixers, and Snell Sirius routing. They also have a complete second control room, much smaller, that can be used for creating a second broadcast.

The reliance on fibre and OLED monitors is also important for another reason: weight. Russia, unlike the rest of Europe, requires trucks to weigh less than 38,000 tons, a full 2,000 tons less than other Sony truck builds. 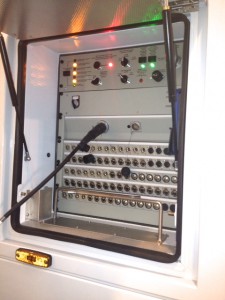 A truck panel on the rear of the new trucks for Panorama makes connections easy.

“That was very challenging and an enormous exercise with the coach builder,” says Davis. “Even the metal in the racks had to be built differently, with holes punched into it to save a few grams. And now we have a clearer understanding of weight saving options.”

Davis says the trucks have also been built to operate more easily in the rough Russian winter climate. The expanding side of the trailer has snow flaps and when it is fully expanded the flaps prevent the expanded side from being covered with snow. And when the side is retracted back into the vehicle the snow simply falls off of the flaps.

The air conditioning unit has also been custom built. “It’s a water-cooled system with three sets of compressors,” says Davis. “It chills the water to six degrees celsius and then the chilled water is used to cool the truck. And when the ambient air temperature is below minus five the compressors ramp down and allow the ambient air to cool the water. It’s green and very eco friendly.”

The final 24-camera units are expected to be delivered to Russia in August. But while the trailers may be gone the knowledge gained will remain.

The storage area in the new trucks built for Panorama includes sliding shelves with foam cutouts to ensure secure transport of kit.

“The key thing is we now know we can build 3G, we know the pitfalls, and we can build trucks that will be secure investments until the industry is doing 4k in seven or eight years,” says Grinyer. “So it will be a lot easier for us going into the next generation of trucks. We know what works and we can guide the customer in their thinking and vendor selection.”