La Liga president Javier Tebas took to the stage at Sportel Asia in Singapore to discuss global innovation as a means of not only improving content but to add value to the audio visual rights around the world. Topping the list? Expect La Liga to install Skycam in four stadiums for the beginning of the 2016/2017 season. 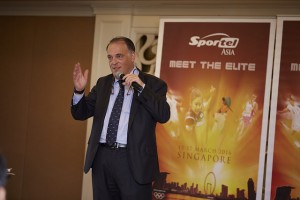 La Liga President Javier Tebas says the league will install Skycam at four stadiums at the start of next season, the first step in taking La Liga coverage to the next level.

“Skycam gives a different sensation to a normal football production and our objective is that by the end of the next season all teams will have a Skycam,” he said during a La Liga overview session at Sportel Asia.

The Skycam efforts is part of La Liga’s continuing efforts to meet the needs of both broadcast partners and fans.

La Liga’s goal is also to expand its connection with fans around the globe via the broadcasts, social media, and other offerings. A big step in that process next year will be a change in the match schedule that will see matches played at 4 p.m. in Spain. That means matches will be on TV (and other platforms) at 10 p.m. in Asia and 10 a.m. in the United States. In addition matches will also kick off at noon and 1 p.m. in Spain, a move squarely designed to increase the presence of La Liga in the Asian market, one that has traditionally been dominated by the English Premier League.

“For more than 50 years no match has been played at 4 p.m. and we had a lot of critics in Spain when we went forward with this decision,” explained Tebas. “But it shows our dedication to fans in the international market.”

Also look for La Liga to better meet the needs of fans around the world by providing additional programming before and after matches that is tailored for different markets.

“Between one match and the next there is a half-hour difference so we will have special documentaries for that half hour and they will be different for each area around the world,” explained Tebas. For example, there are players in La Liga from around the world so one goal is to use those half-hour programs to bring fans in a given region closer to players in La Liga who are from that region.

“The practice of La Liga is to use the most recent technology to allow us to make a better quality product [for rights holders],” said Tebas. “And we want to create more sensation for the fans as it makes them more loyal, both the fans we have the ones we don’t yet have.”

Replay technologies, for example, are more important as a means of giving fans who use second screens (what Tebas calls “digital natives”) a chance to be as connected as possible.

In addition, La Liga will increase its reliance on social media influences, and not just those in sports.

“There is almost more value in working with someone who is not from sport and to get them talking about La Liga,” added Tebas. “Our followers and fans cannot go home and forget La Liga until the next weekend or rely just on what is on TV or in the newspapers. We are lucky that technology allows us to be very close to the people. It has only been eight years since Steve Jobs introduced the iPhone and it has changed our life as the phone is now a television, a calendar, an alarm clock. And at the bus stop you will see people checking their phone to see the results of La Liga.”

That is one of the reasons La Liga Labs has been formed, a division of the company focused on investigating how the league can best meet the needs of fans who use smartphones, tablets, VR glasses, videogame platforms, and much more. “Our strategy also involves investing a lot of money into anti-piracy as there are fans who are investing in Spanish football who should not feel shortchanged because others are watching without paying,” he explained.

Tebas also discussed the potential for the use of instant replay.

“We are in favor of the technology but in 2016 FIFA said the technology must come from one of two companies and that has an economic cost,” he said. “We already have the technology in our stadiums but the system is not approved so we cannot use it. Our hope is that FIFA will allow us to use the technology we have so we don’t have to pay a tax as our system costs much less than the ones that FIFA says to use.”

Also look for La Liga to enlist current and former players to work as ambassadors for the game around the globe.

“We will have teams of players travelling throughout the year to events and TV studios,” he said.